The Civil Aviation Authority will not double the inspections of small aircraft to improve maintenance standards as recommended by accident investigators.

A report by the Transport Accident Investigation Commission criticises standards in the wake of an emergency landing by a light plane in Nelson in 2011. The report says the fatal balloon crash that killed 11 people in the Wairarapa town of Carterton in January 2012 is also evidence that maintenance is not good enough. 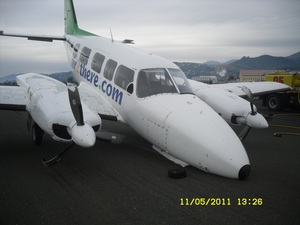 It recommended the CAA introduce duplicate inspections but the authority says the advice is not sufficiently supported by the investigation.

The commission found the nose landing gear jammed on a Piper PA31-350 Navajo Chieftain during an air2there.com training flight in Nelson because wrong parts were used.

The plane sustained substantial damage in the landing but the two pilots were not injured.

The commission said the plane had a history of nose landing gear defects. It found some of the repairs of earlier problems carried out by various maintenance organisations had not been in accordance with CAA rules, and maintenance manual procedures had not been followed.

"What we're saying is this is an indicator that maybe there's a wider problem and that's the thrust of the recommendations to CAA to go out and find out the extent of the problem and put measures in place to fix it."

Investigator Peter Williams told Checkpoint there had been problems with the Piper Chieftain's landing gear for four years and each time they were fixed using either wrong parts or not following the manufacturer's manual.

Not needed for landing gear - CAA

CAA director Graeme Harris told Checkpoint double checks on maintenance areas of small aircraft are reserved for crucial areas such as flight and engine controls and are not necessary for landing gear.

"If you start trying to do duplicate inspections on too many parts of aircraft maintenance, then I suspect we may end up with them not being done properly. So I guess we'd rather focus on those really critical systems."