Courts Minister Chester Borrows says security at Napier's courthouse will be reconsidered, after a stabbing there.

Police have arrested a Mongrel Mob member over the attack, in which another man was stabbed in the forearm. 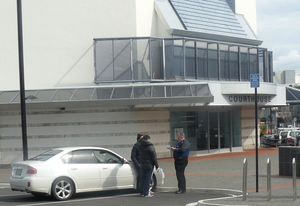 Police say there was a fight in the court waiting room, then one man involved left the building and returned with a knife or screwdriver, stabbing another man.

The attacker ran off and was arrested a short time later at a Napier house.

The injured man was given first aid by court staff and treated at Hawke's Bay Hospital. Police say his injuries are not life threatening.

Mr Borrows told Checkpoint a metal detector was turned off when security officers went to investigate the fight.

"What it exposes is an expectation that if there is an incident, that the security officers will investigate that, and you would expect them to," he says.

"Now if you are suggesting then that we need to have people who are maintaining a security presence on the scanning machine and then have others walking around at all times, then I think we need to reconsider where we are and that's what we're doing.

Mr Borrows says attacks have been far fewer since security was stepped up in courthouses but it's not possible to prevent every incident.

The Law Society is calling for an inquiry, saying it's incumbent on the Ministry of Justice to keep people safe and it failed to do.

The convenor of the society's criminal law committee, Jonathan Krebs, says the ministry needs to hold an inquiry to find out exactly how the person was able to get a stabbing device into court

Mr Krebs says it was a list day in Napier, meaning many people were summoned to court, so it would have been sensible to keep a metal detector on all day.