Thousands of people lined the streets of Napier on Monday afternoon to congratulate the Hawke's Bay Magpies on winning the Ranfurly Shield.

The team stood on the back of open-deck utes that weaved their way through the central city to the cheers of flag-waving fans. 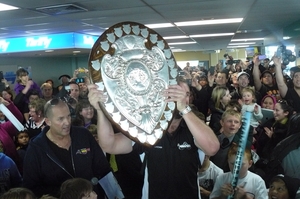 Hundreds turned out to welcome the Magpies home. Photo: RNZ

Earlier, hundreds turned out at Hawke's Bay airport to welcome back the team, which lifted the shield from Otago 20-19 last Friday night, after Otago had held the coveted trophy for just nine days. Captain Mike Coman thanked the crowd, saying it was a proud moment for Hawke's Bay rugby and he was happy to share the shield.

Hawke's Bay last won it in 1969 and held it for four seasons - a golden era for the province.

Another victory parade will be held in Hastings starting at 10.30am on Tuesday, and the local rugby union says it has plans to take the shield to other parts of the region this week, including schools.

The shield, known as the Log o' Wood, had been paraded around Otago since the province brought it home after a 56-year absence. Now Hawke's Bay has almost emulated their feat, winning the trophy it had not held since 1969.

Hawke's Bay player Zac Guildford says it's a career highlight equal to winning the World Cup. "I'm just glad the boys dug in and it was bloody tough," he says. "We were playing an Otago team that were determined but in the end we managed to scrape through."