Police are paying out nearly a quarter of a million dollars in compensation and costs to the family of a teenager killed in police crossfire on an Auckland motorway.

The deal is the first of its kind to be made by police.

Halatau Naitoko, who was 17, was accidentally killed by a bullet while driving his courier van on the North-Western motorway, as police chased drug-fuelled gunman Stephen McDonald in November 2009. 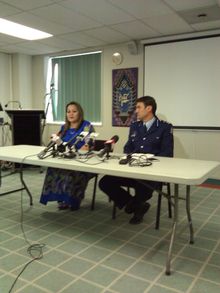 The Independent Police Conduct Authority found the two Armed Offenders Squad officers were justified in firing four shots but the way they did it was inaccurate and they didn't identify the risks of hitting others.

The authority said the operation lacked effective command and control.

On Monday afternoon police announced an offer the family said they had accepted, comprising $100,000 for hardship and suffering and $25,000 towards legal costs.

That is in addition to an earlier payout of $100,000 from police, which wasn't made public until Monday's announcement.

Assistant Commissioner Allan Boreham says the settlement defuses the family's compensation claim and while the process took time, it needed to be done correctly.

"I don't pretend in any way to understand what it would be like to have lost your son in these circumstances so if it was to take longer, then that would have been fine as well. What was important is that police and Ivoni's family arrived at a figure to pay for that hardship and suffering, and that's what we've done."

Halatau Naitoko's mother Ivoni Fuimaono says the money has helped out but they do not regard it as compensation for what they have lost.

"Whatever money we were getting from police, it will never bring back Halatau. My son's life is priceless." She says no money can be an exchange for his blood and life.

The family's lawyer Colin Pidgeon says police badly embarrassed the family after they broke the compensation contract by revealing the earlier payment of $100,000, saying they were told not to tell anyone about it.

The family says the compensation deal expressly says it would not be mentioned.

Mr Pidgeon says it is distressing as they have previously had to lie to family and friends about the money and Ivoni Fuimaono was in tears.

Mr Pidgeon says he will complain to police on Tuesday, and then decide whether to take more action.