Police investigating the deaths of two people in rural South Auckland say a firearm was used but the community should not be worried.

The bodies were discovered at a property on Ponga Road in Opaheke near Drury just after 11am on Sunday by a daughter of one of the victims. 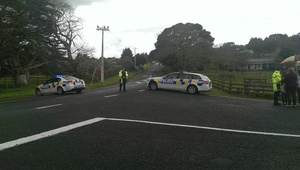 Police are treating the deaths as suspicious. Photo: RNZ

Police say they are still unable to fully establish what happened but there was an element of violence involved.

Inspector Dave Lynch says they have identified one of the victims as a man in his 50s who they understand was a tenant in the property.

The other victim is a woman of similar age who's yet to be identified.

Mr Lynch says the bodies were found by the man's daughter who had stayed the night at the property with a female friend.

Mr Lynch wouldn't say whether there were any signs of forced entry or if the police are searching for anyone else in connection with the deaths.

He says crimes of this nature are hardly ever random, and people in the community should not be concerned.

Mr Lynch says the investigation is likely to take a few days.