Police in New Plymouth are about to move into a purpose-built station they will share with Corrections staff - and prisoners.

About 120 staff will work from the building, which contains the first shared remand facility in the country. 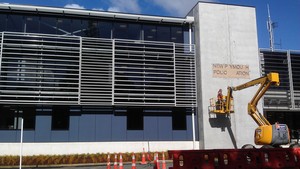 The signage going up on the new police station in New Plymouth. Photo: RNZ

It has 24 remand cells with two beds per cell, to be managed by Corrections, and 12 single cells the police will run.

Corrections staff are coming from the city's old prison, which closed earlier this year.

The police have been working from a former gym for the past 20 months while the building was being completed.

"I think they've had enough of the other station, it's got no heating, no cooling, it's old and rickety, there's wires hanging down from walls and it'll be nice to go into something that's new and tidy and flash."

Mr Telford says the building will open for business on Monday and an official opening will be held in October.