Several earthquake-damaged houses in Seddon have been labelled uninhabitable, and bad weather has hindered attempts to secure unstable chimneys.

The Marlborough township, which is home to about 450 people, bore the brunt of Friday's magnitude 6.6 quake that struck 10km to the south-east at 2.31pm. 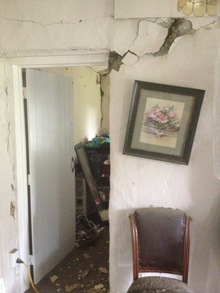 The Marlborough District Council says staff had finished checking every house in the township by 5pm on Saturday.

Five have been deemed uninhabitable, subject to further inspections.

The council says high winds forced fire service staff to abandon their attempts to secure unstable chimneys on Saturday afternoon, after at least 12 came down in Friday's quake.

About 30 people spent Friday night in a welfare centre set up at Seddon School and a family of four and one other person are staying there on Saturday night.

The council says rain has caused flooding on some roads in Marlborough and people should not drive in the dark because of slips and uneven surfaces.

State Highway 1 south of Blenheim re-opened on Saturday afternoon after being closed on Friday when cracks appeared in the road.

The Transport Agency says it has filled in the cracks but the road remains patchy in parts so motorists should expect some delays.

Search and rescue and fire service staff have visited many rural houses in the wider Awatere area and they report damage of a severity similar to Seddon township.

Earthquake Recovery Minister Gerry Brownlee says Seddon will be able to cope with the heavy rain that has followed the quake.

There were concerns the rain, which is forecast to set in for up to 24 hours, could leak into damaged homes.

But Mr Brownlee says because so few homes are involved, there should be no problems.

Civil Defence in Seddon says the earthquake damage to homes is widespread, although mostly restricted to roofs, brickwork, chimneys and windows.

Civil Defence is urging anyone who needs help to contact the Marlborough District Council by telephone if that is possible, or to come to the emergency centre at Seddon School.

The Marlborough District Council is operating its callcare number 24 hours a day. That number is 03 520-7400.

Seddon's only supermarket reopened on Saturday so people can stock up on supplies. 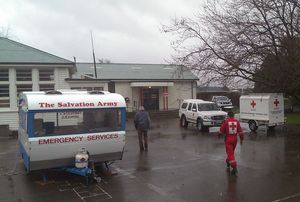 A welfare centre has been set up at Seddon School. Photo: RNZ

Five people were treated in Wairau Hospital in Blenheim for quake-related injuries and one of them was admitted and is in a stable condition.

Another patient from the hospital was transferred to Nelson Hospital on Friday afternoon as a precautionary measure in case surgery was required.

Aftershocks have continued on Saturday with a magnitude 5.5 at 8.58pm, 10km south of Seddon.

The Marlborough Lines Company says it has restored power to all homes.

The earthquake initially cut power to 4000 properties in Marlborough and about 100 were still without power on Saturday morning.

The company says it finished reconnecting the power supply to 100 Grassmere homes on Saturday afternoon.

It says there was a minor hitch earlier on Saturday, when a new fault cut power to 100 more homes in nearby Dashwood, but supplies to those properties were also quickly restored.

The company says aftershocks are continuing to place strain on the lines.

Civil Defence says it understands there may be problems with the rural water supply at Ward.

It says repairs have begun but people are advised to conserve water.

Water lowered at dam near Seddon

The owner of a private dam near Seddon says an emergency trench has had to be built alongside the dam to release water, after torrential rain in the quake-damaged area.

The private dam on Haldon Road can hold 250,000 cubic metres of water and is 20 metres high.

It is built across Scarborough Creek, which flows through Seddon, about 15 kilometres downstream.

The dam's owner, Dick Bell, says a trench is being built along the spillway to release the water into another catchment, amid fears it could overflow or burst.