The emergency demolition of a quake-damaged nine-storey lift shaft in central Wellington is likely to begin on Saturday.

Tenants of offices and flats in the fall zone around the site, in Lukes Lane off Manners Street, have been evacuated. 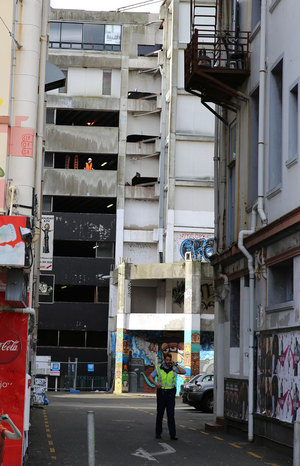 Council contractors braced the shaft with metal beams after it was damaged in the July earthquake but it suffered more damage in the latest quake.

Police say the shaft is looking even more precarious than after the first quake, as some of the beams securing it to the side of the adjoining building have broken.

Council spokesperson Richard Maclean says without the emergency strengthening work done after the initial shake the shaft would very likely have collapsed on Friday afternoon.

Mr Maclean says the council and police have evacuated people in surrounding buildings until the demolition is complete.

A nearby bar was asked to close for the evening.

The disused shaft is the relic of a failed building project.

Extensive damage was also reported in a multi-storey building on Molesworth Street in the capital. Many of the ceiling tiles in the stairwell collapsed.

The building used to house the Inland Revenue Department and other government agencies but is believed to have been vacant for the past five years.

Shopkeepers below say damage from the July quake appears to have worsened.

Wellington mayor Celia Wade-Brown says a team of engineers is available to conduct outdoor surveys on buildings on Friday night.

However, the council says there have been no reports of major damage in the city, or injuries.

Chews Lane, between Willis and Victoria streets, is closed due to the danger of falling glass.

The footpath in Bolton Street, near the intersection with The Terrace, is also closed due to falling glass.

The Wellington Regional Emergency Management Office in Thorndon will remain activated overnight, with the situation to be reviewed in the morning.

Preliminary checks of Hutt Valley buildings have not revealed any significant damage.

Westpac Stadium, where the rugby Test match between the All Blacks and Australia is scheduled next week, has been closed following the earthquake.

A note on the stadium's website says the building will remain shut until engineering checks can be done.

Massey University's website says there are no reports of injuries or damage but the campus was closed for precautionary reasons.

Otago University advises its campus will remain closed on Monday while engineers inspect the buildings.

At Victoria University, the Old Government Buildings, Rutherford House and Te Aro campuses were evacuated and closed. The Karori and Kelburn campuses are open and are being checked.