Police in Christchurch are warning city retailers to be on the lookout for counterfeit $20 notes. 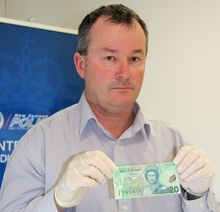 The fraud squad has received four complaints this week of counterfeit $20 notes being circulated at retail outlets.

Acting Detective Sergeant Mike Freeman says it appears the offender or offenders have purchased items at large or busy stores, handing over the counterfeit notes and hoping they won't be noticed.

He says the complaints have all been from stores in the Riccarton area; a supermarket, a bulk retail store and several smaller outlets.

Police will be speaking to a person of interest in relation to the complaints.