The Commerce Commission on Wednesday issued a draft decision that would alow the lines company to raise prices for customers in the South Island region. Orion is owned by the Christchurch City Council, which has a majority stake, and the Selwyn District Council. 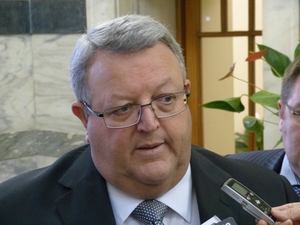 In May this year, Orion asked the commission for permission to increase prices to make up for $86 million in lost revenue during the damaging quakes in 2010 and 2011.

Instead, the commission is proposing to allow the company to claw back $28.6 million of actual costs, not the total amount sought. Orion is not allowed to try to recover all the revenue it says it lost between 2010 and 2012.

The proposal will allow Orion to increase power prices by 9.2% from 2014, resulting in an average increase of about $5.20 per month for a typical household customer. Orion had proposed a 15% hike, or $8.50 a month.

But Gerry Brownlee, the MP for Ilam, was scathing of the plan, telling Radio New Zealand's Checkpoint programme on Wednesday Orion shouldn't be burdening the people of Christchurch with extra power costs - and needs to think again.

"There's two things here. There's the commercial activity that the directors are bound to undertake and the management accordingly. But then there is the decision by the shareholder about whether or not they think it's a good idea for this community-owned company to be jacking its prices like this - I don't."

Orion's chief executive Rob Jamieson says there was community consultation over the proposed price rise and the councils were aware of the level of the increase being sought. He told Checkpoint he doesn't believe profits should be used to fix the network.

"If we were to do that, then that would undermine incentives to invest in the network. You're asking for subsidies from ratepayers to build the power network in Christchurch."

Mr Jamieson said the Commerce Commission has spent six months reviewing the proposal and the company now has six weeks to respond.

The chair of Greypower's energy committee, Alan Davies, says Orion should have looked at taking out a long-term loan instead of passing on the costs to customers.

"The trouble is when they get to the situation where they are now - a semi-privatised organisation - it's all about making money and sharing those profits out to their shareholders. In this particular case, two of those shareholders are Selwyn District and Christchurch City (councils). And of course, they're raking out a dividend from Orion on an annual basis."

Mr Davies said it's a relief Orion hasn't been allowed the 15% rise it wanted.

Orion and the public can make submissions until 20 September and the commission will make a final decision by 29 November.

The price increase is until 2019, but during that period the company is allowed further rises to account for inflation.

Fears for some in community

Social services in Christchurch say they have real fears for the well-being of some residents.

The Christchurch City Mission believes the increase would be a nail in the coffin for some of the South Island city's most vulnerable residents.

Social services manager Gray Crawford says since the quakes, it has been swamped by "a new working class of poor".

"We're seeing people with some desperate circumstances here in Christchurch at the moment and a huge increase in mental health issues as well. For a minority here at the mission, it's really desperate and they probably wouldn't be able to cope with any increase in the cost of living such as electricity."

Leeann Curtis, spokesperson for residents' advocacy group CanCERN, said while the reason is understandable, the price rise is still a bitter pill to swallow and Cantabrians face increased bills that people in the rest of the country don't understand.