A Marlborough-based brewery has been named champion brewery in New Zealand at the International Brewers' Guild Awards. 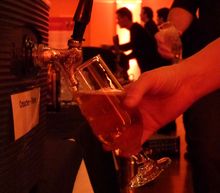 Hundreds of beers and ciders were entered in the awards. Photo: RNZ

Renaissance Brewing out-poured about 60 breweries which had entered 541 beers and ciders to be judged by national and international judges in Wellington on Thursday.

As well as the overall prize, the brewery won trophies for their Enlightenment Black the RIPA and a British style ale, Tribute Barley Wine.

Head brewer Andy Deuchars said he was amazed to have won, and anything helped, it was a true passion shared by everybody at the brewery.

Overall, 41 beers were given gold medals, indicating they are world class. One of the judges, Simon Walkenhorst, says he was very impressed by the quality of the entries and the very clever use of indigenous ingredients.