Finance Minister Bill English says the Government did not seek any guarantees about jobs in a deal struck between the owners of the Tiwai Point aluminium smelter and Meridian Energy.

State-owned power company and New Zealand Aluminium Smelter (NZAS) announced on Thursday they had reached a deal that cut the cost of electricity by an undisclosed amount. 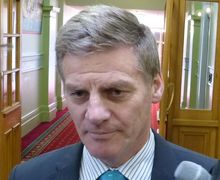 The Government contributed $30 million, in a one-off payment to the smelter company, to secure the deal.

The Labour Party says the Government should have bot the smelter company to guarantee workers' jobs at least until 2017.

State-owned enterprises spokesperson Clayton Cosgrove says up to 400 jobs could go in a major restructuring plan the smelter is drawing up.

Mr English told Radio New Zealand's Nine to Noon programme on Friday ensuring the safety of those jobs was not part of the deal and no undertakings were sought on the operation of the company.

"This is all about balance. We've got one view that says a government shouldn't intervene in this at all, just let the thing go; we've got another view that says you should be all over it. We made a pragmatic decision that the simplest possible way of getting this deal over the line without providing ongoing electricity subsidies or trying to run their company."

Mr English has said no further taxpayer funds will be paid as a subsidy to keep the Southland smelter operating and the company's majority owner Rio Tinto is now expected to get on and make the facility viable.

The Engineering, Printing and Manufacturing Union says while employees were relieved at Thursday's deal, they remain anxious about restructuring plans due to be confirmed in September.

Smelter workers are not allowed to talk to the media, but one told Radio New Zealand on condition of anonymity he fears the restructuring could cost up to half the jobs at the plant and he will be moving to Australia for greater job certainty.