Conservation Minister Nick Smith says it is taking too long for a West Coast open cast coal mine to get the all-clear from authorities.

Bathurst Resources' escarpment mine on the Denniston plateau on conservation land near Westport was granted interim approval from the Environment Court on Thursday, but is still subject to legal challenges and requires a further 27 approvals from local authorities and iwi. 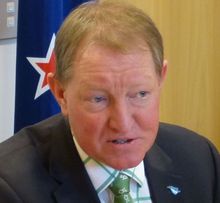 Despite the decision, obstacles remain - a decision from the Court of Appeal on whether conservation group Forest and Bird can challenge an aspect of the resource consents, and a Supreme Court ruling on whether the mine can be stopped because it will contribute to climate change.

Dr Smith says any further appeals will bring the court process into disrepute.

"I hope particularly for the community of the West Coast - that's had more than its fair share of kicks in the guts, with the awful tragedy of Pike as well as the economic difficulties of Solid Energy - that those appeals are resolved as quickly as possible so that that community on the Coast has got some opportunity to economically recover."

The 200-hectare mine would be the second largest open-cast coal mine in New Zealand, though it has a lifespan of only six years.

Buller District mayor Pat McManus says worker layoffs at the Stockton mine and the closure of the town's second biggest employer, Holcim Cement, are hurting the district.

He says the escarpment mine's 225 jobs are desperately needed and the whole town stands to benefit if the mine goes ahead.

Forest and Bird says the Denniston plateau is home to 20 species of plants and insects only found there, as well as kiwi and giant land snails. Regional field officer Debs Martin says the organisation will consider the latest ruling before deciding whether to take further legal action.

Bathurst needs to meet a number of what it calls minor conditions related to the remediation it is promising to carry out in return for digging up the land.

The company expects to be coal mining on the plateau by the end of this year. Managing director Hamish Bohannan told Radio New Zealand's Checkpoint programme on Thursday he is pleased with the court's decision which sets out how the area will be protected.

"We've had technical experts crawling over the plateau really understanding what is there, what the impacts will be, how we can minimise these impacts. And as importantly, how we can protect in other areas we do preserve."

Mr Bohannon says at most, 20% of the Denniston plateau will be mined.