Auckland mayor Len Brown has confirmed he will seek a second term in office in October. 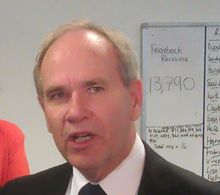 He says the city should not deviate from its current path, focusing on big projects such as the downtown rail tunnel, which he wants to start before the 2020 date suggested by the Government.

Mr Brown wants to further squeeze down the rise in the annual rates take to 2.5% and complete the introduction of free swimming pool access for all Aucklanders.