The Mana party candidate for the Auckland mayoralty, John Minto, is pledging free public transport to unclog the city's roads and cut the time spent commuting. 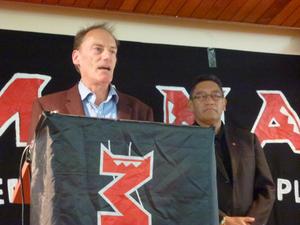 Mr Minto says the policy would save commuters an hour out of each working day and avoid the need to spend hundreds of millions of dollars every year on new roads.

He says the city would lose $280 million a year currently collected in fares, and would need to spend an extra $400 million to double the number of buses and start the downtown rail tunnel project earlier than planned.

He says that would be offset by savings of up to $400 million a year, no longer needed for new roading projects, and unclogging Auckland's roads would give workers an extra hour a day to spend with their families.

Mr Minto says the policy, which would take a year to introduce, already works in two European cities.

The idea of free public transport has previously been floated for Auckland, the last time by Labour Party mayoral candidate Jim Anderton in 1977.