An $11 million compensation fund set up for businesses by the container ship Rena's owner and insurer is likely to cover the claims of those affected by the grounding.

The container ship ran aground on Astrolabe Reef off the Tauranga coast on 5 October 2011. 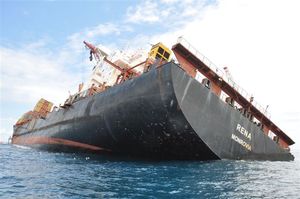 The vessel's insurer, the Swedish Club, says the compensation fund is separate from a $27.6 million settlement with the Government for costs incurred during the clean-up operation.

A spokesperson for the insurers, Captain John Owen, says the High Court in Tauranga will decide whether claims are legitimate and how much each claimant will get.

Tauranga mayor Stuart Crosby says everyone will be looking forward to seeing a conclusion to the compensation issue and it has been a long time coming. Mr Crosbie says many businesses have already had to move on from the grounding at a substantial cost.

Russ Hawkins operates Fat Boy Charters and says he lost about $12,000 after in the aftermath of the shipwreck.

Mr Hawkins is part of a group of businesses that has been looking at a class action against the Rena's owners, but says he hopes the fund will cover most companies that have directly or indirectly made claims.

Bruce Crosby is a director of the Papamoa Beach Top Ten Holiday Resort and is on the committee for Business Action Group Rena.

Mr Crosby says for the group's part, no further action will be taken against the Rena's owner and insurer unless someone comes out of the woodwork with some massive claims.

He says the group is far too small to chase big insurance companies around the world and no matter what happens, businesses will lose along the line.

Claims must be submitted to the High Court by 30 October this year.