The Minister responsible for resolving the problems with Novopay, Steven Joyce, says government ministers should not follow a Deputy Secretary of Education and resign. 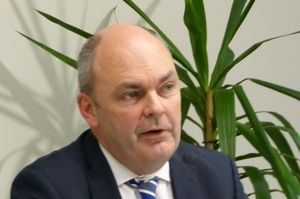 Steven Joyce says information given to ministers was inadequate and in some cases wrong. Photo: RNZ

The report, released on 4 June this year, said ministry advice to government ministers about the Novopay was inconsistent, over-optimistic and misrepresented the project just before its launch.

The system has been plagued with thousands of errors since its introduction in August 2012, with underpayments, overpayments or no payments at all to some teaching staff.

There are seven Deputy Secretaries at the Ministry of Education. Anne Jackson said that until July 2012, she was responsible for shortcomings identified by the inquiry.

Steven Joyce said on Tuesday that Ms Jackson was one of two ministry staff members facing an employment investigation, but her resignation means she will no longer remain under scrutiny.

However, he said ministers who decided that Novopay was ready to be introduced should not necessarily follow her example. They were Finance Minister Bill English, Education Minister Hekia Parata and Associate Education Minister Craig Foss.

Mr Joyce said it is now clear that the information they were given was inadequate, and in some cases incorrect. He said Ms Jackson resigned under the terms of her contract and was not offered a golden handshake.

Anne Jackson said she is truly sorry for additional pressure and stress put on teachers, staff and pay administrators during Novopay's introduction. She said it was her decision to resign and no pressure was put on her to leave.

Acting Secretary for Education Peter Hughes said Ms Jackson has made an outstanding contribution to the public service for the past 25 years and he respects her decision.

However, an Auckland principal says it is a shame that Ms Jackson has become the fall person over Novopay. Jill Corkin from Snells Beach School told Radio New Zealand's Checkpoint programme on Tuesday it is wrong for all the blame to lie with her.

"We have always wanted someone to put their hand up and be accountable. I just think it's a shame that one single senior official with the sort of background that Anne Jackson has got has to be the fall person for this really."

Mrs Corkin has previously called for heads to roll over Novopay and believes ministers need to take responsibility - not just Education Ministry staff.