A scientist says it's possible that a huge number of insects could wash ashore on North Island west coast beaches after what may have been major swarms in recent nights.

The MetService says its rain radars commonly pick up irregular masses on warm, dry summer nights that are thought to be insect swarms, but not during daylight hours.

One mass showed over Auckland about 9pm on Friday and another mass over Bay of Plenty about 3am on Saturday, at a time when there was no rain in either location. 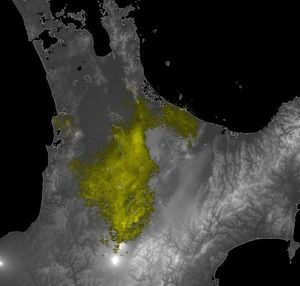 The MetService rain radar at 3.30am on Saturday. Photo: METSERVICE

Both drifted to the west over the Tasman Sea.

A Forest and Bird entomologist, Peter Johns, says it could be the Tasmanian grass grub.

He says a similar occurrence resulted in a spectacular sight on the Canterbury coast in the 1980s.

"It was just a mass of black insects on the shore, rolled up like seaweed, with the seaweed."

Mr Johns says it is the right time of year and temperature for the Tasmanian grass grub to emerge from the soil and swarm. Butn he says a vast mass of the size seen on the radar would comprise billions of insects and is beyond comprehension.

MetService forecaster Andy Downs said there's no certainty about what the mass is.

On its website, MetService said that to show up in radar imagery they must have some of the characteristics of precipitation particles - similar size, fairly numerous, and enough water content, or perhaps coating.