The prime minister made his annual appearance on Tuesday on the Waitangi marae - after a stoush between two kuia over who should escort him.

This time John Key wasn't drowned out by protesters with bull horns, as he was last year.

And despite some pushing and shoving around him, he says he'll keep coming back - even describing the kuia at the centre of the scrap as a gentle old lady.

The prime minister's arrival was delayed due to heated discussion at the gate of the marae between elders and the Harawira family over just who should escort Mr Key. 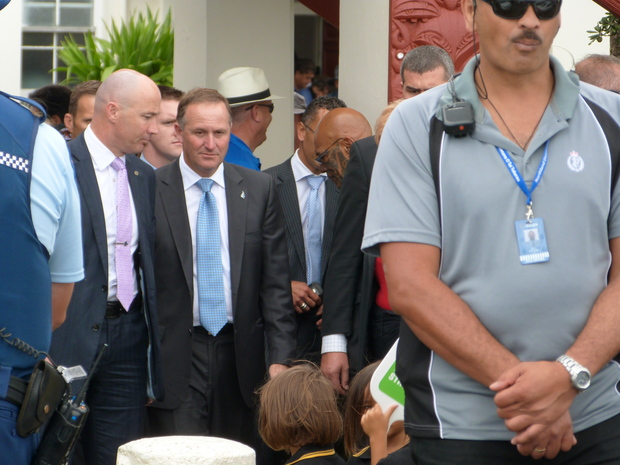 In the end a deal was mediated by Ngati Whatua kuia, Naida Glavish, allowing for both Titewhai Harawira and another kuia, Ani Taurua, to share the job.

However, after some jostling as the party entered the meeting house, Mrs Harawira took centre stage.

John Key says it is up to Nga Puhi to decide how Waitangi was seen.

"There's always an unpredictable nature about what's going to happen next when you go on the lower marae, so that raises the tensions."

New Zealand First leader Winston Peters says Mr Key should have told the marae trustees who he wanted to lead him on to the marae, rather than let them fight it out on the day.

"It was up to the prime minister and his party to choose which kuia he had gone with, and if it was Titewhai that was it - no controversy."

He says he is angry with Mrs Harawira.

"It is not the first time this has happened, she seems to want control all the time, all I can say is she's a damn bully you know? She bullies everybody else. And everyone around here's frightened of Titewhai."

The rest of the day went off uneventfully, ending with the Navy's Beat Retreat ceremony on the Treaty grounds.

The marae in the Bay of Islands is preparing for the annual Waitangi celebrations on Wednesday, marking 173 years since the first Maori chiefs signed the Treaty of Waitangi and gave birth to the New Zealand we know today. Some 2000 visitors, including politicians, are expected to attend.

February 5 has always been the day for political argy-bargy, dating back to 1840 when Maori chiefs gathered at the marae and debates raged late into the night on whether they should sign the Treaty of Waitangi.

Mrs Harawira, of Ngapuhi, escorted the Governor-General Sir Jerry Mateparae on Monday, despite Waitangi elder Kingi Taurua saying that it was time she let someone else have a turn at doing the honours.

The trustees of Te Tii Marae said they would not allow this year's powhiri for the Government to descend into chaos.

Last year, Mr Key had to cut his speech short and leave the marae after he was drowned out by protesters shouting into megaphones. He shrugged off the insults and left, but Maori elders were mortified.

The Maori Party is dismissing the disagreement about who would lead the prime minister on to the marae at Waitangi as insignificant.

Maori Party co-leader Tariana Turia says the conflict had nothing to do with the Treaty and it should be forgotten about.

"It's sad that that the behaviour of one or two people is then portrayed to the rest of the country as conflict, because every other other place that celebrates the Treaty, even up here in Waitangi, the majority of the occasion is very calm and respectful."

Ms Turia says people come to Waitangi to celebrate and honour the signing of the Treaty.