Thousands of New Zealanders took a break on Wednesday morning to watch from observatories as the moon made its way across the sun.

The partial solar eclipse began at North Cape at 9.12am and within 20 minutes had begun in Auckland, Christchurch and Wellington. By 10.30am it was at its peak for most of the country.

More than 1500 people made their way through Auckland's Stardome Observatory, and more than 600 visited Wellington's Carter Observatory.

Carter Observatory astronomer Claire Bretherton says it was quite spectacular even though only 76% of the sun was covered in the lower North Island.

While solar eclipses are quite common, she says only people in a small part of the world usually get to see them.

Dr Bretherton says those who didn't know what they were looking for probably didn't notice much change in the brightness of the sun. 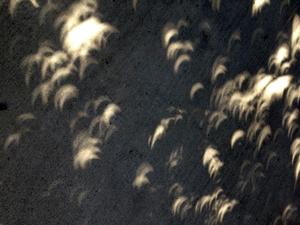 The eclipse seen through a pohutukawa tree at the Victoria University coastal ecology laboratory on the south coast of Wellington. Photo: Associate Professor Jeff Shima

"We've had a wonderful morning,'' she said. ''We believe over 600 people came to the observatory today, looking through telescopes, buying solar glasses, outside sharing the experience with each other."

"This is the most substantial eclipse we'll see here for some time,'' Dr Bretherton added.

''In fact it won't be until 2028 that a total eclipse will happen, and that will only be seen by people in the South Island.

''It's a thin path that the total eclipse takes but it will go through the Dunedin area. And in 2035, we'll see another full eclipse from the Kapiti area."

Parts of Australia saw a full solar eclipse on Wednesday, but the maximum seen over mainland New Zealand was 89 percent of the sun's surface in shadow in the Far North. Half of the sun was covered in the South Island.