The body of a man has been found after a truck and trailer unit crashed into a stream on the Desert Road in the central North Island.

It appears the truck missed a bridge over the Waihohonu Stream, 1km north of the Rangipo Intake Road between Waiouru and Turangi, about 4.30am on Thursday. 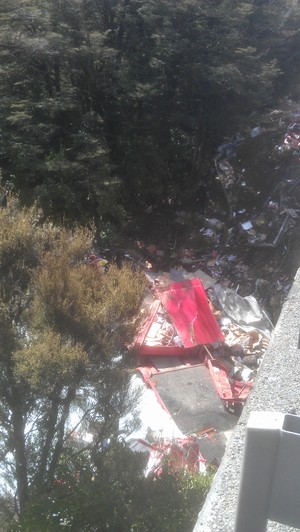 The truck plunged about 5m after crashing on the Desert Road. Photo: RNZ

The truck was carrying hazardous materials and plunged about five metres down a bank and became submerged in fast-flowing water.

Police say the body was discovered after the cab was lifted from the water by crane on Thursday afternoon and is believed to be that of the driver.

They confirmed that the driver is a 50-year-old man from Porirua, but his name is not expected to be released until Friday after family members have been notified.

The Waikato Regional Council says some of the insecticide and pool cleaner the truck was carrying may have got into the water.

However, it says the chemicals would have been diluted fairly quickly and any ecological effects will be minor at worst.

The truck is being recovered from the stream and will be examined. The crash caused part of the Desert Road on State Highway 1 to close for most of the day, but it reopened on Thursday night.

The Rangipo power station was closed as a precaution earlier in the day, but has since resumed operations.