The publisher of the Otago Daily Times is planning to cut almost a quarter of its subediting staff.

The country's largest independently owned media company, Allied Press, is merging the work of laying out and editing the daily newspaper with its community titles in order to cut costs. 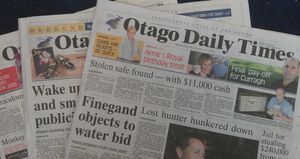 Allied Press is the last major operation in the country to streamline the layout and editing of its publications' pages.

New Zealand's two other newspaper chains have shifted the work to regional hubs or outsourced it to a separate company.

Engineering, Printing and Manufacturing Union organiser Mike Kirwood says Allied Press has had advances from page editing companies but has opted to keep the work in-house and reduce costs.

The company has proposed the loss of six jobs out of 22 full-time-equivalent roles, mostly as voluntary redundancies.

Otago Daily Times editor Murray Kirkness says he hopes to make final decisions by the middle of next week.