Milford Road in Fiordland has been closed for several days by a rockslide.

Work to re-open the 200-metre section of road will start on Sunday morning,

Amongst the debris are boulders estimated to weigh up to 200 tonnes. 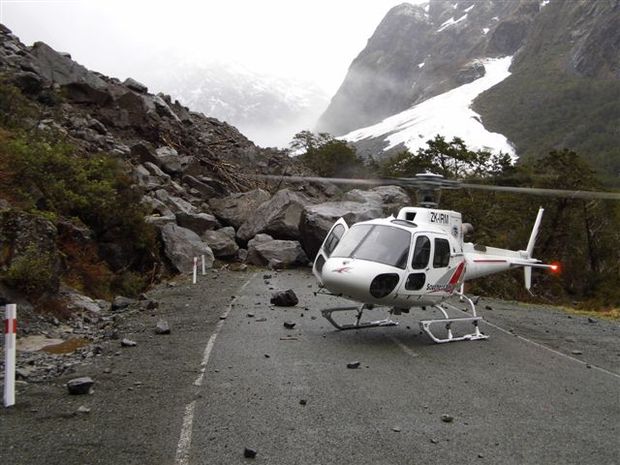 The boulders on the Milford Rd at 'Red Slip'. Photo: NZTA

Tourists at Milford Sound had to be flown out and the road is expected to be impassable for several days.

The landslide is about 2km on the Milford side of Falls Creek at a location known as 'Red Slip', which last came down about 25-30 years ago.

The Transport Agency closed Milford Road at 4pm on Friday in case of avalanches as severe weather blew in from the Tasman Sea. The slip occurred during Friday night.

Geotechnical engineers have finished their day-log inspection of the slip and it has been deemed secure enough to begin clearing work on Sunday.

The agency's Southland area manager, Peter Robinson, says the boulders are so big they will need to be drilled before being blown apart so they can be removed from the site. He

says they will use non-explosive tools to break the rocks apart.

"Some of the equipment has arrived on site today for us to start drilling and popping the rock."

He says this involves allowing the explosive to expand in the drill holes, rather than blasting the rock.

Mr Robinson says a 30-40 tonne excavator will also be used. The road's tarseal has been damaged and the work is expected to take several days.

Some tourists opt to stay

About 50 tourists whose overnight cruise docked on Saturday morning were flown to Queenstown on Saturday afternoon by the company Real Journeys.

Chief executive Richard Lauder says others decided to stay back and fly out over the next few days.

"Some people who had rental vehicles in there were reluctant to fly to the other side of the slip and leave a vehicle parked at Milford Sound.

"So some of them are staying, some of them we're putting up on our boats overnight, but I guess they'll be reviewing their own circumstances tomorrow."