The Government has rejected a bid by a group of Solid Energy miners to keep the Spring Creek and Huntly East coal mines in full operation.

The group left Parliament angry and upset on Tuesday afternoon after the Government dismissed their proposal, saying their meeting with State-Owned Enterprises Minister Tony Ryall was a waste of time.

The state-owned coal company on Monday announced some 460 jobs would go as it restructures its business to cope with the global downturn in coal sales.

It plans to mothball the Spring Creek mine on the West Coast, putting 234 staff out of work as well as 130 contractors; more than halve its 313-strong head office in Christchurch and eliminate 63 jobs at the Huntly East mine.

The workers' delegation arrived at Parliament just before midday.

Five of the miners presented Mr Ryall with a $40 million plan they believe could keep both mines in full operation.

Afterwards, Mr Ryall said while he has empathy for the miners, the Government won't be making any capital injections into Solid Energy to forestall the changes.

"Even if the Government did put another $50 to $70 million into Solid Energy, there's no guarantee that we would not find ourselves in this position in another year's time, with low coal prices and the company needing to make quite difficult decisions which have significant impacts on families and communities."

Mr Ryall says Solid Energy did not make the decision to lay off workers lightly. 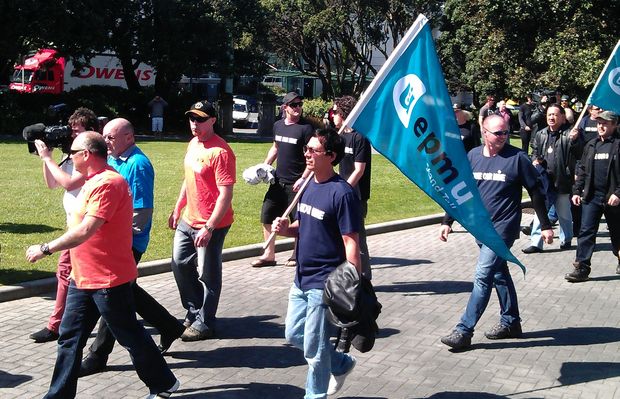 Miners were asking for the Government's help to save their jobs. Photo: RNZ

Ged O'Connell of the Engineering, Printing and Manufacturing Union says Mr Ryall listened to what the miners had to say but wasn't prepared to step in to help them.

Mr O'Connell says the meeting was cordial and courteous but the result led them to think it was a waste of time. "It was clear that (the Government's) current economic strategy or policy just doesn't allow them to reinvest in any of their SOEs."

One of the miners, Paddy McKenzie, who has worked for the company for more than 20 years, says it is heartbreaking.

He says it is going to have a massive impact on the West Coast, as there are no alternative careers for him and many of his colleagues.

Another miner, Trevor Bolderson, says the company has been throwing money around like confetti, and only a few weeks ago recruited a miner from Australia.

He says the man's container arrived at his own expense, and is now stuck in Lyttelton.

Prime Minister John Key says the situation at Solid Energy could have been avoided if the company had already had a mixed-ownership model.

The company is one of four state-owned enterprises the Government intends to put up for partial sale.

Mr Key says Solid Energy has a significant amount of debt on its balance sheet and has embarked on a lot of new technologies, some of which are not proving successful at this point.

"A traditional coal company with external investors would probably be more cautious in some of the things it had done."