The Prime Minister has confirmed SAS logistics officers recently sent to Afghanistan had a hand in the operation that led to the capture of a man connected with last month's killing of two New Zealand soldiers.

Coalition troops in Afghanistan have located the man after an investigation into the deaths of Lance Corporals Rory Malone and Pralli Durrer during an attack in Bamyan province on 4 August.

John Key says New Zealand SAS officers helped gather intelligence used in the operation, but did not assist on the ground. 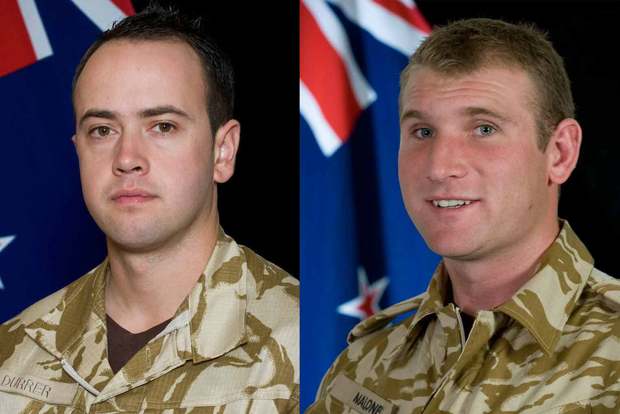 Mr Key says the man arrested is a weapons dealer and is suspected of being the third ranked member of the Taliban network that carried out the attack on the New Zealanders.

The Prime Minister says taking such people out of action creates a safer environment for the New Zealand soldiers still stationed in Afghanistan.

The Government has approved patrols in Baghlan, but Mr Key will not confirm whether the defence force is doing them. The attackers are thought to have come out of Baghlan province.

Lance Corporal Durrer's grandfather, Jack Durrer, says it is a relief someone will be held accountable following the arrest.

Mr Durrer says while the arrest brings back painful memories, it is a relief someone will be punished.

"We're not looking for an eye for an eye or something like that - I think it's up to the court to decide what they want to do with him."

"He's suspected of being third in order of precedence of the Taliban leadership in that district," Major Crighton said.

"He is, or was, a weapons dealer and a major figure in the Taliban network that was responsible for the attack on 4 August that resulted in the death of the two New Zealand soldiers."

An insurgent was killed during the operation carried out by coalition and Afghan forces, he said.

"That force was confronted with a hostile threat from insurgents in the vicinity of where this Taliban weapons dealer was located and one insurgent was actually killed during this operation."

A spokesperson for the US-led coalition in Afghanistan, Major Adam Wojack, says coalition forces acted on the weight of very credible intelligence, and the man will now face the Afghan justice system.

"There was a lot of surveillance of ... Taliban enemy organisations, insurgent organisations in that area following the attack.

"Bamyan had been so quiet for so long and these attacks were just so out of the ordinary we had to find out what was going on.

"That was a vulnerability for ISAF in the centre of Afghanistan, and it looks like we've begun to find out what was going on there with the detention of this Taliban leader."

In the attack in early August, Lance Corporal Malone was fatally shot while trying to rescue his company commander, who was injured in the first exchanges of gunfire. Lance Corporal Durrer died while being evacuated.

On 19 August, Corporal Luke Tamatea, Lance-Corporal Jacinda Baker and Private Richard Harris from the Provincial Reconstruction Team in Bamyan province were killed when their Humvee was blown up by an improvised explosive device.

The Labour Party hopes the Government does not pursue its idea of extending patrols in Afghanistan.

Labour's foreign affairs spokesperson, Phil Goff, says while it is good the man has been captured, it does not mean the area is any safer.

"I think it is good that this man has been taken out, but he won't be working on his own. There will be others there, and there will be potential further IED (improvised explosive device) attacks.

"That's why it's not sensible to proceed with the Prime Minister's idea of extending patrolling when our service personnel don't have that basic protection on mine resistant vehicles."

Mr Goff says other insurgents will still be planning attacks, so it would be stupid to extend the patrolling of New Zealand troops stationed in Bamyan into a neighbouring province.