Labour Party MP Louisa Wall is urging opponents of her same-sex marriage bill to reconsider their position ahead of the bill's first reading in Parliament.

The bill to legalise gay marriage looks set to pass its first reading with a comfortable majority on Wednesday.

Prime Minister John Key has already signalled his full support and expects several members of his caucus to vote the same way. 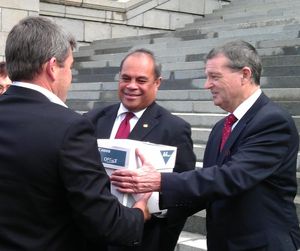 Most of the Labour caucus will support the bill, but there are a few exceptions, including Su'a William Sio and list MP Damien O'Connor who are opposed.

Ms Wall, the MP for Manurewa, says she would like people to think about the current anomaly in the law, as a marriage licence is the only licence in New Zealand that a gay person can't apply for.

Radio New Zealand's parliamentary chief reporter says the bill should pass easily on Wednesday night, but the numbers are likely to tighten as it progresses through the House.

MPs will be given a conscience vote, which means they can cast individual votes and are not bound to vote along party lines.

National MP and minister Maurice Williamson says as a libertarian, he would not oppose someone getting married to their dog - let alone someone of the same sex - and believes people should be free to do what they choose.

Petition against bill presented at Parliament

A 48,000-strong petition to reject the bill was presented at Parliament on Tuesday.

Family First New Zealand presented the petition and says the definition of marriage does not need to be changed to give same-sex couples legal recognition.

Spokesperson Bob McCoskrie says the numbers who signed the petition in about a month shows the level of opposition for the bill.

"We're simply saying we're standing for marriage as it stands. The argument is that same-sex couples deserve legal recognition.

"We've got no problem with that, but they've already got it - it's called civil unions and we don't need to change the definition of marriage to achieve legal recognition, we can leave marriage as it stands."

Mr McCoskrie says marriage has always been reserved for a man and a woman because of the potential for children.

Some churches in South Auckland are calling on Louisa Wall her withdraw the bill and have issued an open letter opposing it.

The letter has been signed by 25 members of the Manukau Ministers Network and their chairman, Pastor Lui Ponifasio, says many more did not get to sign it, but are also against it.

Most are based in Ms Wall's electorate and Mr Ponifasio says they have told her to leave the definition of marriage alone.

Mr Ponifasio says marriage is already understood to be between a man and a woman and civil unions were introduced for same-sex couples.

He believes there are many more pressing issues for her to deal with in Manurewa, such as poverty and prostitution.