The bodies of three soldiers killed by a bomb in Afghanistan have begun their journey back to New Zealand.

The Defence Force says a ceremony was held on Tuesday at Bagram air base in Bamyan province to honour Corporal Luke Tamatea, Lance Corporal Jacinda Baker and Private Richard Harris. 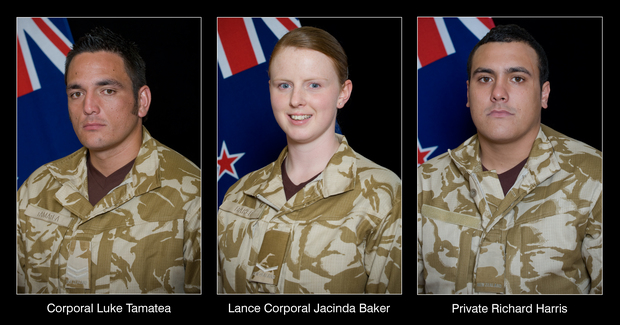 The soldiers from the New Zealand Provincial Reconstruction Team died instantly when their Humvee was blown up by an improvised explosive device in north-eastern Bamyan on Sunday.

The bodies have been put on a Royal Australian Air Force Hercules, which will carry them as far as Australia, and are being escorted by members of the Provincial Reconstruction Team.

From Australia, they will be transferred to a Royal New Zealand Air Force Hercules for the final leg to New Zealand.

A ceremony will also be held on arrival in Christchurch on Thursday.

The families of the soldiers on Tuesday spoke about their loss and the pride they have in their children.

Corporal Tamatea's family said the army turned his life around and he was a natural leader who took his job extremely seriously.

They said the 31-year-old wanted to be on the first flight to Banda Aceh in response to the devastating Boxing Day tsunami in 2004 so he could make the most difference in people's lives.

But the achievement that he was most proud of was his family - especially his four daughters, who will remain his legacy.

The family of Lance Corporal Baker said she was full of spirit, fearless and always ready for her next adventure.

Her relatives described the 26-year-old as their rock and someone calm to turn to for practical help. They said she was proud to be an army medic and her death leaves behind a hole in the family that can never be filled.

Family and friends of Private Harris said he was their pride and joy who would light up the room with his smile.

They said the 21-year-old loved his family dearly and loved life, describing him as laid-back, quiet and mischievous. He was looking forward to going to Afghanistan and had matured into a fine young man of whom they were extremely proud.