Fire fighters who fought a blaze in a restaurant in central Wellington on Saturday say it was lucky there was no wind or the fire could have spread to other buildings. 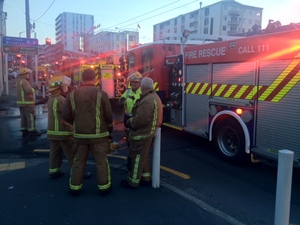 Ten appliances were there at the height of the fire. Photo: RNZ

The alarm was raised shortly after 2.30pm.

Fire fighters had to chainsaw holes in the walls of the building to find and extinguish the blaze.

Station Commander Andrew Walker says the blaze on the corner of Vivian and Taranaki Streets, started in the kitchen and then went into the roof and walls of the two storey wooden building.

He says with an older building the design can allow the fire to spread without fire fighters being able to tell where it is, so it's necessary to locate the fire before being able to extinguish it.

Mr Walker says in this case holes were made in the wall to locate the fire before it could be extinguished.