Wellington has finally got its welcoming sign - the word "Wellington" with the last letters symbolising a wind gust. 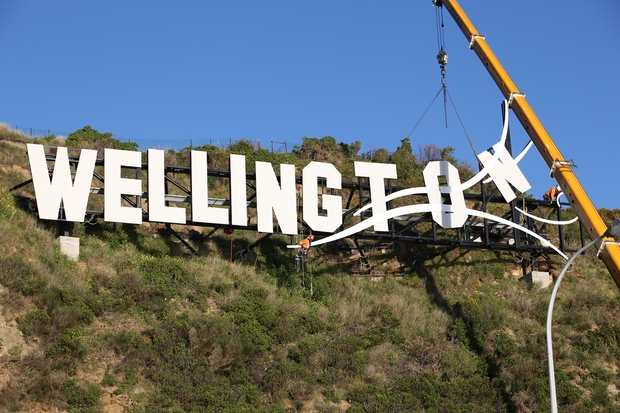 Up, up and...in place at last. Photo: WELLINGTON AIRPORT

The three-metre-high letters made of corrugated iron were erected on a Miramar hillside near the city's airport on Friday. A crane hoisted the letters up to be bolted onto a frame by men with abseiling equipment.

A public argument started in 2010 when the airport suggested a "Wellywood" sign in Hollywood-style lettering, and a competition was held instead to determine the design.

The advertising firm Saatchi & Saatchi won with its "Blown Away" design.

The airport's Graeme Anderson says the new sign will stay for the next four years at least and could then be swapped with the All Blacks sign that went up during the Rugby World Cup.

"It's like changing a picture on a wall," he says.

The airport says the sign, which is intended to be seen by people flying into the city, has cost $80,000.