A building designer who represents the Hundertwasser Foundation says cracks appearing in the artist's famous toilet building in Kawakawa are potentially very serious and must be fixed urgently.

Richard Smart was Friedrich Hundertwasser's assistant at the time the Austrian artist created the toilets in 1999.

The toilets were a gift to his adopted hometown. 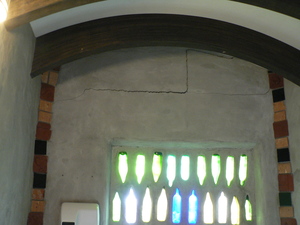 A crack in the famous Kawakawa toilet. Photo: RNZ

Mr Smart says the cracks appearing in the building are the result of subsidence caused by water - possibly from a new spring - in the ground beneath the foundations.

Far North District Council chief executive Dave Edmonds says the council has been monitoring the Hundertwasser toilets since 2006 and the cracks don't signify any structural failure, although they are unsightly.

However, he says it appears the time has come to intervene.

Mr Edmonds says it will be necessary to shore up the foundations in some way, and the options include sinking deep piles beneath the toilets or pumping an expanding resin into the ground to stabilise it.