One of the 28 miners rescued from an underground fire at a gold mine near Waihi says his colleagues were relaxed and joking in their refuge chamber, and he was not scared at all.

The men made it to three safety chambers after a truck caught fire early on Tuesday morning, sending smoke into the Trio mine's ventilation system.

Steve Sant says they normally have at least four practice drills a year, so everyone knew what to do when the fire broke out. 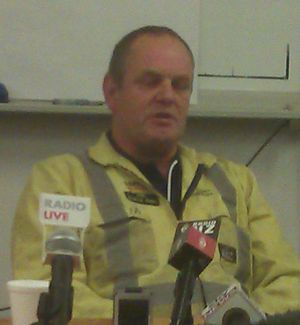 He says no-one was fearful about not getting out alive.

"The mood in there was very good, everybody was just laughing and joking," Mr Sant says.

"One of the boys had newspapers there so they were reading that; even though they were about three months old. And we had a deck of cards so we were playing cards and just generally keeping ourselves amused."

Mr Sant says he now knows the real worth of practice drills.

Newmont Mining expects work to resume at the mine at the weekend.

It says photos of the truck show two of its tyres have exploded, as was expected, but the danger from two unexploded rear tyres won't pass until midday on Thursday.

The company says the truck will be towed out at some stage.

Two investigations - by the company and the Government's high hazards unit - are underway.