Thousands of households in snow-affected areas in the South Island are facing a cold night without power, while roads in parts of the island are closed.

Lines companies battled a wintry blast on Wednesday, trying to restore power to Christchurch, North Canterbury and parts of Kaikoura following heavy snowfall before being stood down late at night.

Orion managed to reconnect 1800 of the 3000 homes that were without supplies in Christchurch before crews were told to go home.

The suburbs of Marshlands, Spencerville, Brooklands, West Melton and the rural area of Horarata have been affected.

Meanwhile, networks company Mainpower says about 1300 homes in North Canterbury including pockets of Kaikoura are also without power overnight. It warned people to keep well away from power lines weighed down by snow, as they could be live.

The snow brought Canterbury's public transport to a standstill, with the regional council announcing on Wednesday afternoon that all buses and ferry services were cancelled for the day and possibly on Thursday.

Predicted cold temperatures overnight have prompted the police to warn motorists in Canterbury to watch for ice on the roads. St John ambulance says people in the region should only travel if necessary and take care if driving or walking.

In Christchurch, schools and tertiary institutions in the region were closed, including Canterbury and Lincoln universities and Christchurch Polytechnic. Courts and tribunal services throughout the region also closed. All postponed cases will be rescheduled and parties notified.

The Christchurch City Council is warning people to stay out of Hagley Park because of heavy snow-laden branches. 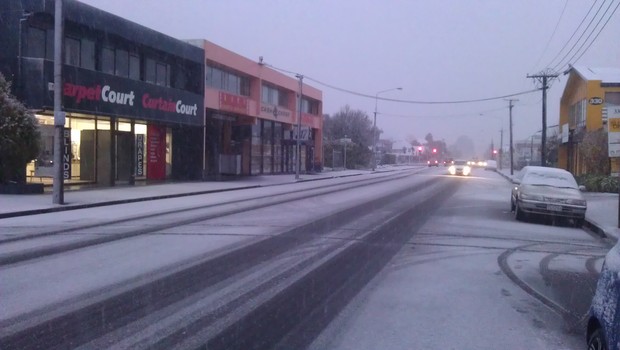 MetService says it expects snow to spread to the North Island on Wednesday night.

It is predicting 2cm to 5cm of snow will accumulate near the summit of the Rimutaka Hill Road in Upper Hutt overnight but is expected to clear early on Thursday.

MetService says up to 5cm of snow could settle on the Desert Road in the central North Island on Thursday morning until about midday.

Snow has closed State Highway 63 in the Tasman district, from St Arnaud to Wairau Valley.

State Highway 65 is closed due to snow and fallen trees between O'Sullivans and Shenandoah.

State Highway 1 from Kaikoura to Cheviot is closed.

There is also black ice on many other roads and the Transport Agency says people should avoid travelling if possible.

MetService is predicting wet snow near the tunnel on Milford Road overnight on Wednesday and on Thursday afternoon.