Christchurch man George Gwaze has been acquitted for a second time on charges of murder and sexual violation.

It is the first time in New Zealand legal history that a person has twice been acquitted of a murder.

The 60-year-old former vet from Zimbabwe was previously found not guilty in 2008, after the death of his 10-year-old adopted daughter and niece Charlene Makaza at their Christchurch home in January 2007. 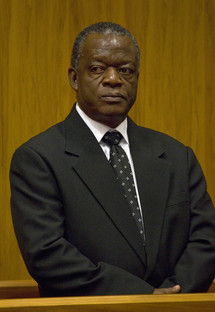 George Gwaze says he was confident he would be acquitted. Photo: POOL / THE PRESS

During the 20-day trial, the jury heard from 88 witnesses and deliberated for almost 15 hours, beginning on Friday at 11am.

After indicating to Justice French on Monday that it was not going to reach a unanimous decision, at about 12.30pm on Tuesday jurors reached a majority not guilty verdict of 11-1 on two charges of sexual violation and were unanimous on one charge of murder.

Throughout the trial, Mr Gwaze's defence team maintained that Charlene Mazaka died of septic shock caused by an HIV infection she had carried since birth and that her injuries were also caused by the disease.

The defence relied on expert witnesses from around the globe to testify that what the Crown said were injuries to her genital region were, in fact, damage caused by the HIV virus mutating.

Mr Gwaze's lawyer Jonathan Eaton says the defence's case hinged on attacking the medical advice that the arrest was based on.

"I felt that we, with the invaluable assistance from four very experienced experts from overseas, created more than reasonable doubt in this case. And that's really where the questions will ultimately be asked about where this case went off the rails."

Gwaze confident he would be cleared

George Gwaze was retried after a previous acquittal was appealed against and quashed by the Supreme Court in 2008.

On leaving the courtroom on Tuesday, Mr Gwaze said he always had faith that the retrial would find him innocent.

"Beyond reasonable doubt - you know, those few words make wonders ... I knew there was nothing that happened to our daughter and I'm glad the jury used all their faculties to come to this conclusion."

Sofisio Gwaze sat through 20 days of detailed and graphic evidence about her daughter's death and family life. She said throughout her husband's two trials, the prosecution did not want to hear the truth.

"Things you know which never happened, but nobody was prepared to listen to us. But we knew we were telling the truth, we had nothing to hide. You'll be explaining all your daily events and, at the end of the day it's used against you, but I still don't mind because I was telling the truth."

Mrs Gwaze believes Tuesday's outcome will give the family closure.

A daughter, Nothando Gwaze, told Checkpoint police should have tried harder to establish what had happened.

"The police really had to dig more about what had actually caused Charlene's death, rather than just thinking that everybody who dies suddenly has been murdered. It's not the case ... people die of sudden illnesses and you just don't jump into conclusions that someone has been murdered."

Another daughter, Maggie Gwaze, said the family had expected a not guilty verdict and they now want to get back to enjoying life and remembering Charlene in the way they want to.

Police have rejected suggestions they put unfair pressure on members of George Gwaze's family while investigating charges against him.

During the retrial Nothando Gwaze gave evidence that police pressured her to incriminate her father.

Detective Superintendent Peter Read told Radio New Zealand's Checkpoint programme there was some pressure, but it was unavoidable.

"There was a lot of pressure placed on the family, but we as an organisation had a duty to Charlene to investigate this matter thoroughly. We needed to ask some hard questions, some serious questions - sometimes those questions were very, very difficult."

The officer in charge of the retrial, Detective Senior Sergeant David Harvey, earlier said police would like to acknowledge the very difficult time the Gwaze family has been through and express the police's sympathy for their loss.

Mr Harvey said he would also like to acknowledge the exemplary medical treatment Charlene Mazaka received from medical staff at a 24-hour surgery and at Christchurch Hospital, and the expertise and assistance of a large number of specialists and expert witnesses in the case.