Gisborne youth are calling on the district health board to reverse a decision to stop free school-based GP appointments. 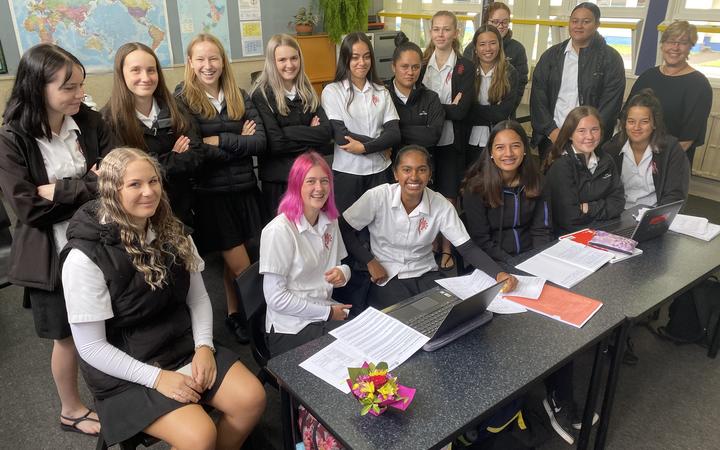 The young people have the backing of at least one health board member.

The students feel ignored by Hauora Tairāwhiti, which decided late last year to stop funding the GP service at Gisborne Girls', Boys' and Lytton high schools. The service had been running for about two decades.

The DHB's former contract with De Lautour Medical provided free doctor's appointments up to three times a week at the schools, which teach more than 70 percent of the district's 3000 secondary students.

"I'd like the DHB to explain how you can make decisions for people who haven't even been asked," said teenager Madison Haggland.

She is one of 29 Gisborne Girls' High students in Kristin McGill's year 12 health class involved in co-ordinating the campaign for an NCEA assignment.

The project has pedigree, with a similar campaign about 10 years ago culminating in a 2000-strong hīkoi through Gisborne and leading to free bus transport for students who live in Kaiti.

"We'd like the DHB to revisit and ultimately reinstate the Doctors in Schools programme," student Talia Chetty said.

The teenagers have sent letters to board members and DHB staff seeking answers to their concerns, but were referred to a press release put out by the DHB on Monday.

Hauora Tairāwhiti chief executive Jim Green and planning and funding manager Nicola Ehau declined to be interviewed for this article.

In a statement, Ehau said "freeing up" the $124,000 the DHB spent on the in-school GP service each year "allows us to consider what else can be done to reduce equity issues for youth... particularly in our coastal and rural communities".

As part of a redesign of youth health services, the DHB wants to establish hubs in Gisborne city and Ruatoria for young people to access free healthcare, but it has provided no time frame for opening the hubs.

Board member Meredith Akuhata-Brown said the students had presented a "solid argument" and it was clear they felt let down by the board.

She believed the DHB needed to "show some grace" and review its decision to end the in-school GP service.

It could consider whether a new plan for youth health services was needed or whether the Doctors in Schools programme should be reinstated until there was something to replace it, Akuhata-Brown said.

The students are open to attending a board meeting to discuss the issue - as suggested by Akuhata-Brown.

They also want to present a petition from the three schools that have lost the GP service.

The petition calls for the DHB to reinstate the free doctor's appointments - at least until an alternative service is up and running - and for it to discuss with current students the issues associated with centralised healthcare at a hub.

Ehau previously told The Gisborne Herald the region's young people had been calling for more wide-ranging health services since 2008, when their views were outlined in a DHB youth health strategy.

The DHB had run more recent surveys with young people, but their message was the same, Ehau said.

It meant they didn't need to become acutely unwell before being seen by a doctor, as could be the case if they were relying on parents or caregivers to pay for and transport them to an appointment.

Guidance counsellor and head of student services Sue Andrew said having a GP at the school minimised disruption to students' learning.

It provided an opportunity to teach young people about self-care, something they might not get lessons on at home, Andrew said.

Akuhata-Brown agreed schools were the ideal venue to address health issues but wanted to ensure the service was whānau-centred.

She was concerned the doctors could end up acting on behalf of parents, but acknowledged how confidentiality allowed young people to seek health services they otherwise wouldn't, such as contraception.