Taranaki Rugby is expecting a sell-out crowd for it's first defence of the Ranfurly Shield this weekend. 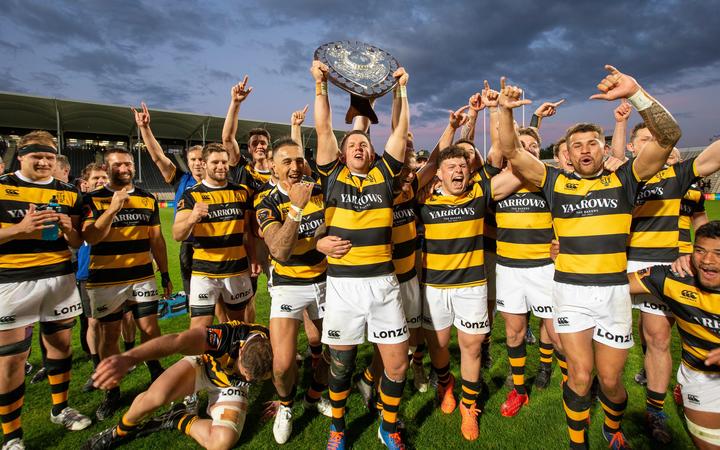 The team holds the shield after a 23 -22 win over Canterbury on Saturday, and this weekend they'll get to defend it against Otago on Sunday.

With the alert level lowering to 1, it means they can do it in front of a home crowd.

Taranaki Rugby CEO Laurence Corlett said there was already a buzz around town.

"People have been missing out on getting out to watch rugby - so they're excited to get out and see some live sport and socialise with people."

Corlett said tickets for the match at Inglewoods TRT Stadium go on sale this morning.

"We only have capacity for about 4500 so I think it will sell-out within a couple of days so if you want to come along get in early.

"The players will get a massive lift, when the crowd cheers you can really see the players react and get into the game more, especially at a smaller ground the crowd will be nice and close to the game," Corlett.

"There's a lot of excitement among our members to attend a game - especially in light of the success Taranaki has had so far this season, there's a real enthusiasm to watch rugby.

"It will be the first defence of the shield so there's great deal of excitement and dare I say it a level of confidence," he said.

Hassall said the lock-downs have created a higher demand for local rugby clubs and the supporters club.

Canterbury Rugby CEO Tony Smail said after the first lockdown ended, the demand for Super Rugby was high and he was hopeful the Mitre10 Cup would be the same.

"If it's anything like club rugby has been this year we will expect a good turn-out, it's a real shame its come after we hosted Taranaki for the shield game with a couple of Barretts playing."

All Black stars like the Barrett brothers and Richie Mo'unga added flare into the first two games of the Mitre-10 Cup, but won't play in the competition again with the All Blacks away at camp preparing for the Bledisloe Cup.

Smail said it's not just the Mitre-10 Cup which would benefit from crowds but junior club rugby - which has had limits on spectators.

"Having crowds will also provide that financial boost but we are genuinely excited that we are back for the moment but we know the virus can come back, but we need to enjoy the highs but also acknowledge that we are not out of the woods yet either."

The Bledisloe Cup was also approaching, with tickets to the first game in Wellington going on sale next week.

"We are also making responsible contingency plans as we have all the way through Covid-19, our preference and intention is to play the match at Eden Park, but if we can't have crowds due to alert levels we will look to move the match to Forsyth Barr Stadium in Dunedin.

"Our primary concern is the health and safety of our fans and we will be guided by the advice of government and health authorities when Auckland's alert levels are reviewed on Monday, 5 October," Lendrum said.