US president Joe Biden has been urging employers to issue ultimatums to their staff: get vaccinated or lose your job. 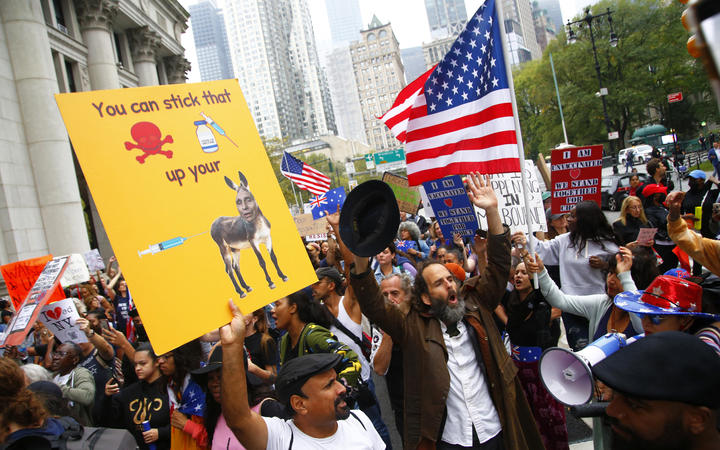 Biden says he will soon bring in a mandate requiring all healthcare workers to have had the jab, and has urged states to do the same with teachers.

In Concord, New Hampshire, it is striking to see some of those attending a large protest against vaccine mandates wearing hospital scrubs.

Leah Cushman is prepared to lose her nursing job rather than get vaccinated.

"My beliefs are religious. I believe that my creator endowed me with an immune system that protects me, and if I get sick, that's an act of God.

"I would not take a medicine that affects the immune system," she said.

She denies there is any conflict between these beliefs and the responsibilities of her job.

Cushman argues that the Covid-19 vaccines remain "experimental", despite the Pfizer vaccine having full Food and Drug Administration approval in the US - meaning the FDA considers that enough data has been gathered to indicate the drug is safe and effective. But she says she no longer takes any vaccines at all in any case. 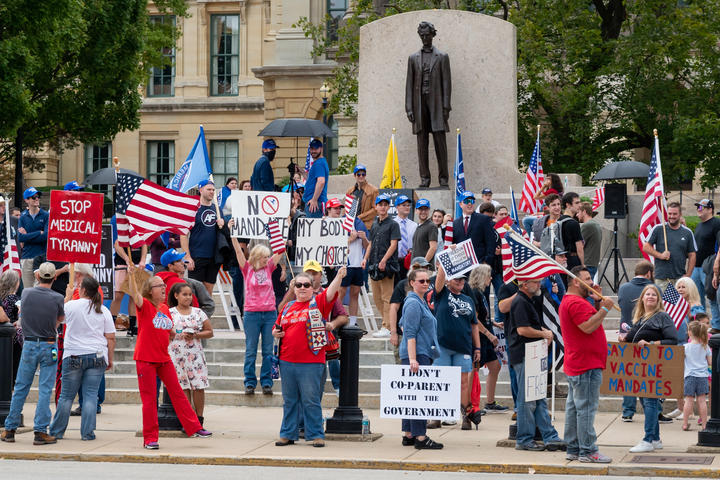 A protest against vaccine mandates and Covid-19 'tyranny' outside the Illinois State Capitol on 2 October. Photo: AFP

Managers who have already decided to impose vaccine mandates at their hospitals say it is primarily about making patients feel safe.

But Scott Colby, CEO of the Upper Connecticut Valley Hospital, acknowledges that he has lost several medical staff over the issue of the vaccine mandate, in a period made busier by the Delta variant and the backlog of non-Covid-19 -related procedures.

The hospital manager says that on balance it is still the right decision to require vaccination, partly because serious coronavirus-related sickness among staff - more likely among the unvaccinated - is an avoidable drain on resources.

But Colby also says he finds some of the opposition does not appear to have a purely medical or religious basis.

"It's not just Covid. There are other vaccines that employees are required to have, like MMR or hepatitis. So to say this is not political would be disingenuous," says Colby.

Back at the rally Leah Cushman, who is a registered nurse and a state representative for the Republican Party, says that her stance is also about freedom.

"The Biden administration is targeting our sovereign rights. We're medical professionals, but we still need the ability to choose what happens to our bodies," she says.

Some of the nurses at the demonstration felt that it was the hospitals playing politics, and that if this was really about patient confidence, the onus would be on weekly testing rather than on getting vaccinated, given that even those who have had the jab can pass on the virus.

However even the option of regular testing is unacceptable to many of those Americans who refuse to get vaccinated. 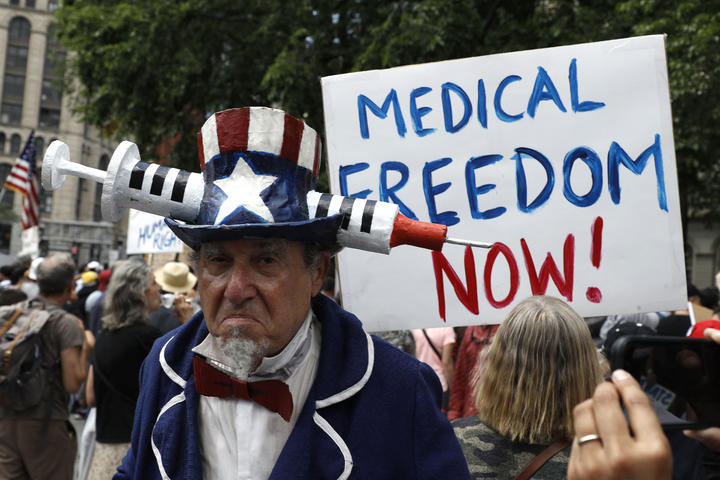 A New York protest against the city's requirement of Covid-19 vaccination for entry into indoor venues like restaurants. Photo: AFP

Kahseim Outlaw has just lost his job in Wallingford, Connecticut for that very reason. He was named Teacher of the Year at his high school last year, but felt the state mandate to get vaccinated was something he could not comply with.

"I do not use any kind of synthetic ingredients in my life, whether that be for medicinal purposes, supplementation or food. So the idea of becoming inoculated is something that goes directly against the way that I live my life," he said.

Like all teachers in the state, Outlaw was offered an alternative of weekly testing but said he viewed that as an "unnecessary medical procedure" that was uncomfortable.

"The way that our soul speaks to us, that little voice that tells us when something is in alignment or not, that voice is telling me that I need to make this particular decision right now."

One thing Outlaw said he was prepared to undertake was an antibody test to show he had contracted Covid-19 in the past, as he believes he did, and so has the body's natural immunity to the virus. He accepts that there is no telling how long a natural immune response will last.

But this is not an option being offered to him by his employer.

In the classroom, Kahseim Outlaw would of course be in close contact with students, but what of employees who work entirely in isolation at home? Do their employers have the right to require that they are vaccinated?

Rob Segrin lives close to Mount Monadnock in a remote part of rural New Hampshire, but has been told he will lose his IT job if he has not had his first Covid-19 shot by the end of this month.

"My job is a 100 percent remote, work-from-home type of job for a federal contractor. I never go in to an office, I never interact with people. I object to the vaccine because in my opinion there have not been enough years of study into it, but I protect my family in the ways I can," says Segrin.

"It felt like this 'do this or you will lose your job' order was a personal attack against me and my family. Like they are coming after my livelihood," he continues.

Segrin says his discussions with his employer have so far been unfruitful, and as things stand he will lose his full-time job, and as a result his health insurance and his family's health benefits too.

But as the US grapples with the arguments over personal freedoms and public health, figures show the virus is still claiming nearly 1500 American lives a day.