Victoria has recorded 535 new community Covid-19 cases and one death as the state wakes to a slight easing of restrictions. 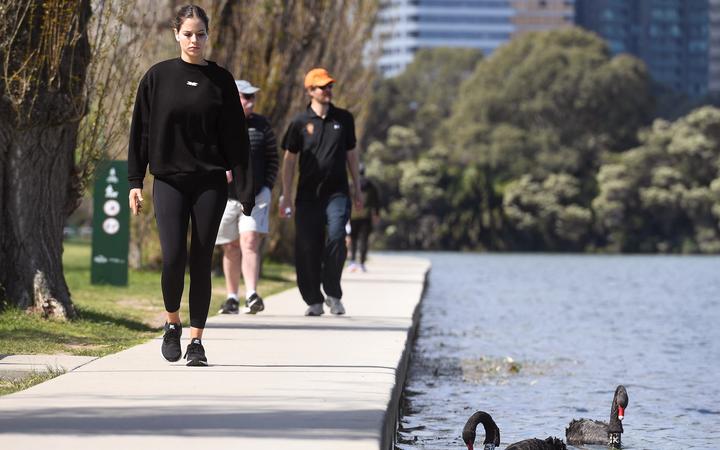 A woman exercises in Melbourne a day before new rules take effect for the response to the latest Covid-19 outbreak in Victoria. Photo: AFP

It is the highest single-day tally since the outbreak began.

They were detected from more than 61,000 test results processed yesterday.

Of the new infections, only 62 have so far been linked to known cases or outbreaks.

There were also 45,537 vaccines administered at state-run sites.

Today's update comes as police are stopping all public transport in and out of the CBD to curb planned anti-lockdown protests planned for today.

The transport stoppage was called for by Victoria's Police Commissioner and has been backed by Melbourne's Lord Mayor, following violent clashes between police and protesters in central Melbourne last month.

Victoria's Department of Transport has warned only essential workers or people attending vaccination appointments will be allowed into the CBD.

Anyone else risks being fined.

The state this week passed a target of having 70 percent of people aged 16 and over with at least one dose of a Covid-19 vaccine.

As a result, people in Melbourne and Ballarat are now allowed more time for exercise and recreation.

The state announced 511 new community cases and one death yesterday.

Meanwhile, Australia's first doses of the Moderna vaccine arrived in Sydney overnight from Europe on one of two flights that will bring a million doses of the vaccine into the country this weekend.

The federal government said almost 2000 pharmacies will start distributing the vaccine next week.

Anyone aged 12 to 59 is eligible for the Moderna vaccine.