First person experience - When Lucy McKenzie's* sister first told her vaccines caused autism, she scoffed. But when Covid-19 hit, the anti-vax arguments drove a wedge down the middle of her family. 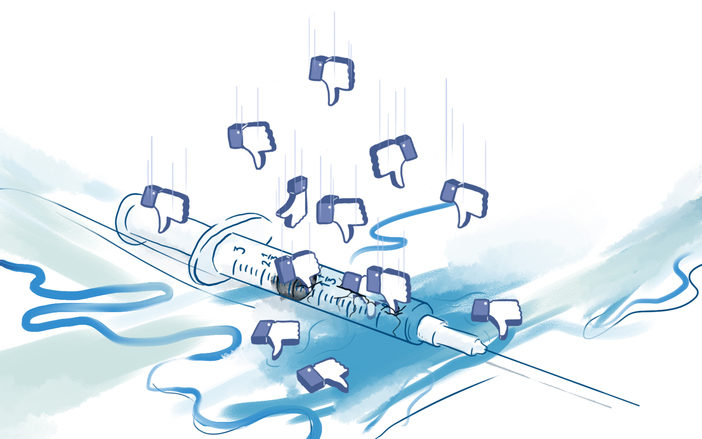 Anti-vaccination and other conspiracy theories spread quickly in the time of social media. Photo: Illustration by Rachel Nesser

A decade or more ago, we used to simply roll our eyes at the health obsessions of our sister Ana* and her new husband Zane*. Whenever they visited, they brought a bagful of vitamins, oils, powders and pills with them, assembling their bottled arsenal on the kitchen bench. In their early 20s and obsessed with wellness, they were opposed to sunscreen, sugar, alcohol, dairy, and gluten, eating and drinking only 'pure' food and water and sneering at anyone who ate McDonald's, drank, or was fat. Christmas was fun.

You could sense how much they were holding back from us, the sheeple. When they told us they were anti-vaccination because "vaccines cause autism", we just scoffed. It was the 2010s, and we were not yet well-versed in dealing with the quasi-religious zealotry of internet conspiracy theorists. If they didn't want to get a flu shot and thought alkaline water was healthier, well, their body, their money, their choice.

Over the years, their beliefs got more extreme, and it was painful to see how they isolated themselves from the rest of the family. Then Zane got sick with an autoimmune disease, a condition where the body attacks itself; a horrible irony considering the anxiety and money they'd expended on 'health'. The medical system couldn't cure him, and they doubled down on their alternative therapies and withdrew further.

Along came Covid-19. By now, 18 months in, it's become obvious that what we once thought were Ana and Zane's fringe health beliefs was, in fact, the precursor to a torrent of misinformation and propaganda in which many of our friends, workmates, extended family, and neighbours have now been swept up.

Covid-19 has helped more of us understand public health. It's helped reveal to generations who never faced polio and rubella that "personal health choices" to not vaccinate actually have huge repercussions for the rest of society.

Being anti-vax didn't mean as much before the pandemic; unless you were travelling, adult vaccination didn't really come up. With childhood vaccination schedules giving us herd immunity against some of the worst diseases in history, we'd vaccinated ourselves out of thinking adults needed them, and that gave us the privilege of ignorance, and the luxury of thinking only of ourselves. We don't have that luxury anymore.

After the first lockdown, when we'd eliminated our first round of Covid-19, did you go to one of those dinner parties where dessert and wine turned into an out-and-out Google battle, with each side flinging 'facts' at each other? The anti-vaxxers sneering down one end, the pro-vaccinators pleading with them to listen to science, and the silent abstainers in the middle, pushing food around their plate and ignoring the entreaties of each side to help them convince the other?

It was astounding to realise just how divided people were, and it felt totally random as to who chose what side. My sister's particular brand of orthorexic, Pete Evans-esque wellness beliefs was once simply a bit weird. But now I've heard those ignorant arguments too many times from too many different people - Gen X Auckland real estate agents, Ponsonby Millennial photographers, racist uncles, rural boomer farmers, fashion-conscious web designers, Gen Z male gym rats, 30-something yogis working in HR. Social media has made their unfalsifiable 'research' so mainstream that it's seeped into the cracks of families and friends everywhere, their opinions freezing and expanding until relationships break under the strain.

I feel like those early arguments have subsided now, since we've begun to fracture along ideological lines. We've muted and blocked the worst offenders, we no longer bring up the subject. Myriad podcasts and think pieces on the issue have educated those who are pro-science on vaccine hesitancy and conspiracy theorist psychology, and the anti-vaxxers smirk and talk amongst themselves. It's too exhausting to argue on Facebook now; it's obvious that 'listen to Siouxsie' just drives people further away.

Recently, things got worse in our family. Zane, Ana, and my mother had a raging argument that yes, my mother was going to get vaccinated, and no, she did not believe in vaccine "alternatives" and wasn't going to listen to them berating her about it. There's been silence ever since. Zane, with his disease, will surely be hospitalised or worse if he catches Covid-19, and that would be a terrible, preventable tragedy.

Before the Delta outbreak, I was at an ordinary suburban coffee cart, waiting for my flat white while two other customers drank theirs and discussed the vaccine rollout. Both anti-vaxxers, they were talking about a mutual friend of theirs, a woman who'd discovered her mother had lied to her about not getting a vaccine. The mother secretly got one, and the daughter found out. She was now worried about seeing her mum in case she and her kids were 'infected' by the vaccine 'shedding' - nonsensical bullshit.

"SO selfish of her to get a vaccine and lie about it," the coffee cart woman said.

"Ugh," the man said. "She's going to be shedding everywhere she goes."

I understood why that woman's mother lied to her daughter about getting a vaccine. My mother did not lie to hers, and now her daughter's gone. Like the anti-vaxxers are always saying, I can only hope my sister wakes up one day. In the meantime, we've lost a family member to a cult.

* Names have been changed.