Fifty-seven people have been arrested as thousands of anti-lockdown protesters breached Covid-19 restrictions and gathered in Sydney's CBD.

A protester (left) tries to push away a police horse in Sydney, as thousands of people gathered to demonstrate against the city's month-long stay-at-home orders. Photo: AFP / Steven Saphore

New South Wales (NSW) Police Minister David Elliott said 57 people have been charged after attending an anti-lockdown protest in Sydney today, and that a strike force has been established to identify others who were there.

Officers issued more than 90 infringement notices to people at the demonstration and more arrests are likely.

"What we saw today was 3500 very selfish boofheads - people that thought the law didn't apply to them," Elliott said.

Twenty-two detectives will be involved in the strike force and will work until "whenever it concludes" to identify protesters.

Earlier, Central Sydney was shut down for several hours as thousands of protesters breached Covid-19 restrictions to march, sparking brawls and several arrests.

People in Greater Sydney and its surrounds have been living in lockdown for exactly four weeks, as an outbreak of the Delta coronavirus variant continues to spread.

Protesters shouted "freedom" as they marched towards the CBD through the suburb of Haymarket, which had just moments earlier been declared a virus hotspot by NSW Health's Jeremy McAnulty at a press conference.

There were chaotic scenes on Broadway, one of the main arteries through Sydney's inner west, with thousands of people blocking traffic to take part in the unauthorised event. 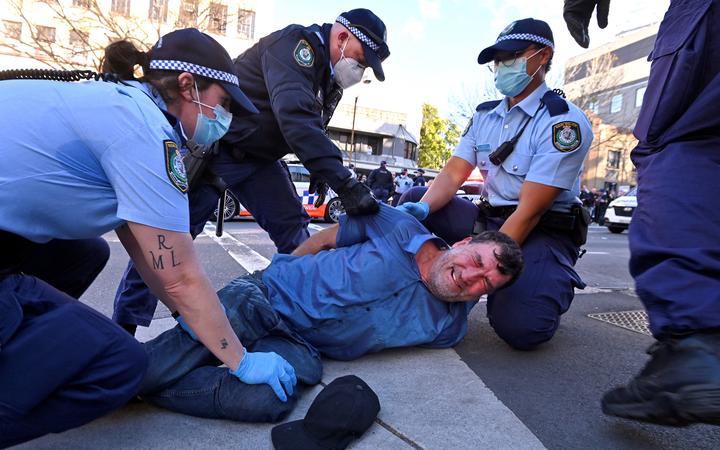 Police arrest a protester at a rally in Sydney Photo: AFP / Steven Saphore

By the time the crowd reached George Street, a brawl broke out.

Officers then formed a barricade across George Street which cut off hundreds of protesters still making their way down one of the country's most iconic thoroughfares.

The Sydney anti-lockdown protest is a superspreader event in the making. If the sheer number of people wasn't enough, everyone is also screaming at the top of their lungs (without masks) and potentially spreading droplets all over the damn place pic.twitter.com/WI2R5Ql4kE

More than a dozen people scaled an awning to jump and chant to a large crowd below.

Some protesters brought their children, while few people were wearing face masks at the demonstration, which started at Victoria Park in Camperdown.

NSW Police received an application for the protest, which was rejected.

Under the current public health orders, people who are not from the same household cannot gather in groups of more than two outside.

Even then, it has to be for exercise.

Mounted police standing by. A line of officers just walked past with purpose, holding pepper spray. This could get ugly very quickly pic.twitter.com/7VcgjKCU88

In a statement, NSW Police said it "recognises and supports" the right to exercise free speech and peaceful assembly but the protest was in breach of the current Covid-19 public health orders.

"The priority for NSW Police is always the safety of the wider community," the statement read.

Police said several protesters had been arrested and as people dispersed, they would be told to walk back down George Street. 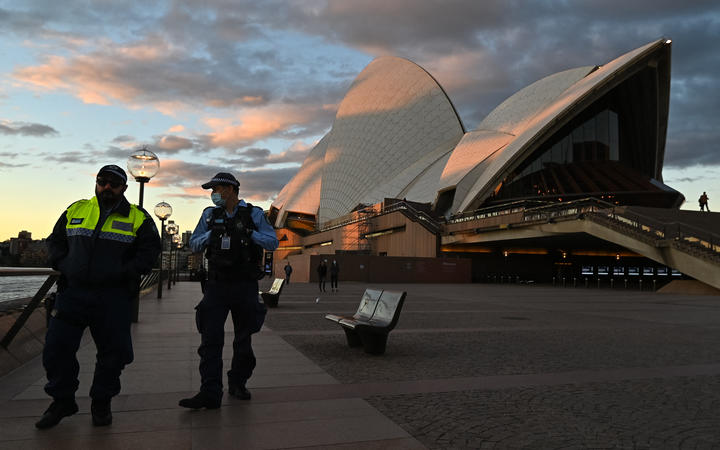 When asked about the protest this morning, Health Minister Brad Hazzard described anyone who got involved as "silly".

"I actually think it is really silly," he said.

"At the present time we've got cases going through the roof, and we have people thinking that it's OK to get out there and possibly be close to each other at a demonstration."

Anti-lockdown protests have also taken place in Melbourne and Brisbane, with thousands of people in each city also calling for freedom from restrictions.

Brisbane is not currently subject to stay-at-home orders, but the state is on high alert after a flight attendant with the Delta variant crewed six Qantas flights to Gladstone, Hervey Bay and Longreach.

Melbourne is in its fifth lockdown, which has already been extended once, and today recorded 12 new Covid-19 cases.