A security guard at the Grand Millennium managed isolation and quarantine (MIQ) facility in Auckland has tested positive for Covid-19 four days after having a sore throat, Director-General of Health Ashley Bloomfield says.

The case has been isolating at home overnight and will be transferred to the Jet Park quarantine facility.

There is no evidence of community spread.

Any potential locations of interest are being looked at but at this time there are none, Dr Bloomfield says.

"The PCR swap returned high CT values around the mid-30s, this can mean either that they are early on in the infection or that they are nearing the end of their infection, or that it's a historical case."

Bloomfield says an urgent repeat PCR test and blood serology are being carried out today to get a better understanding.

He says the person lives alone but Auckland Regional Public Health is investigating whether there has been any contact with people in adjoining accommodation.

The person usually travels to work in a private vehicle with a colleague, he says. The colleague is considered a close contact and is now self-isolating at home, Bloomfield says. 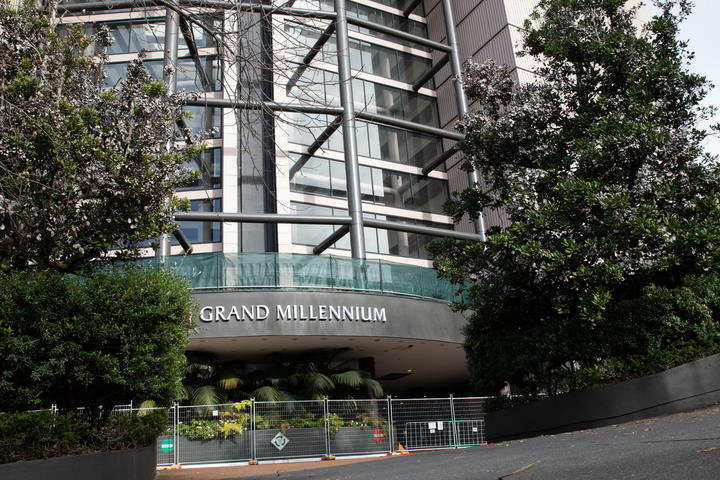 The Grand Millennium Hotel, which is being used as a managed isolation facility, in Auckland CBD. Photo: RNZ / Dan Cook

"The case's colleague has been fully vaccinated and will be having a swab taken today," Dr Bloomfield says.

He says there is no further information on why the security guard has not been vaccinated yet, but they should have been offered it. He says it likely is related to the logistics of getting the vaccination, and there is nothing to suggest it was refused.

"We just don't have the information as yet."

On frontline workers not wanting to be vaccinated, Bloomfield says he's confident in the current procedures at the MIQ facilities. He says about 95 percent of frontline border workers have accepted the offer of a vaccine.

"I am pleased with the speed there and the level of acceptance is very high."

He said the Grand Millennium facility would be audited now - similar to those done at the Pullman and Grand Mercure facilities - given a cleaner there also tested positive for Covid-19 in March.

"Our measures in place are as good as they've ever been," he says, but the audit will check to make sure there is nothing there.

The whole genome sequencing for the cleaner's case indicated it was the UK variant and it was considered to be a close match to a returnee who had stayed at that facility, "but the epidemiology link has not been able to be established."

The facility is one of the largest, and Dr Bloomfield says there have been no problems there other than the cleaner and the security guard.

If and when locations of interest are identified the Ministry of Health will make them public, including on the ministry's website and through push notifications.

Whole genome sequencing on the case's test sample has been started and should be complete tomorrow afternoon, Bloomfield says. 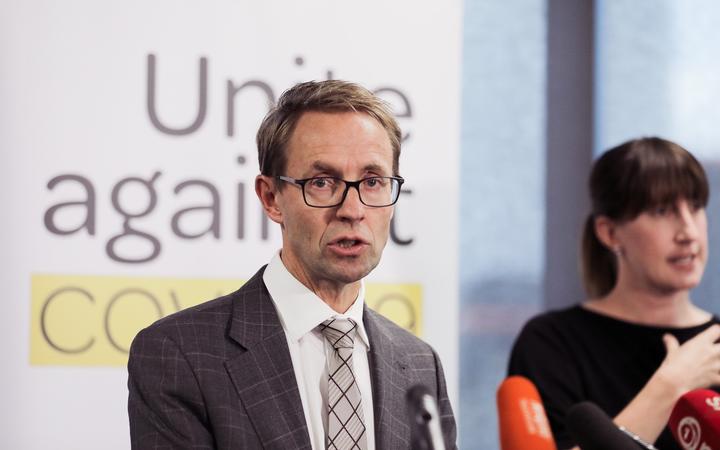 Other new cases in MIQ

Dr Bloomfield says there are another 23 cases found in MIQ, four of them historical cases.

"This is obviously a high number," he says. The rolling seven-day average of new cases at the border is now seven - that's up from three in the last few days.

An additional 10 people have recovered, bringing active cases to 95. Total confirmed cases are at 2199.

Bloomfield says 17 of the 24 cases reported today came from India.

The other three active cases identified today include people travelling from England, Egypt and Pakistan. All travelled via UAE.

The historical cases - who are no longer infectious - arrived from Bangladesh, Switzerland, Turkey and India, via UAE, Qatar and Egypt. These cases were previously under investigation and have now been confirmed as historical, and therefore counted in today's tally.

Measures may be introduced for in-transit cases from India

Bloomfield says testing suggests the cases from India are recent infections, and so became infected during their travel to New Zealand.

He says the current assessment of cases arriving from India is that there is no reason to not take the predeparture testing documentation and results at face value.

"Individuals are becoming infected during their journey within India."

Mumbai and Delhi have imposed curfews and there is a very active outbreak in Mumbai, Bloomfield says.

These rising rates of infection are the most likely explanation for today's cases, Bloomfield says.

The ministry has given advice on what additional measures could be put in place to help reduce transmission in transit - on the New Zealand and India side - he says.

There may be additional isolation requirements for people coming from high-risk places like India and Brazil, he says, including putting those travellers in the same MIQ facility.

Following Dr Bloomfield's briefing, Prime Minister Jacinda Ardern announced New Zealand would be temporarily suspending all travel - including by New Zealand citizens and residents - from India into New Zealand because of the increased risk.

Bloomfield says there is a very active global pandemic of Covid-19 under way and "sometimes it is easy to forget that here in New Zealand, where we have no transmission of Covid-19 in our community".

"We do need to keep our eyes on what is happening globally."

"There are also significant numbers of deaths being reported every day."

Brazil just yesterday reported more than 4000 deaths in a day.

The government announced today it had established a new scientific advisory group to advise it on crucial Covid-19 decisions, including any changes at the border and the ongoing vaccine rollout.