A New Zealand company has found 11 drugs that show promise in fighting the Covid-19 virus, and while it's early days, it has begun rapid planning for clinical trials. 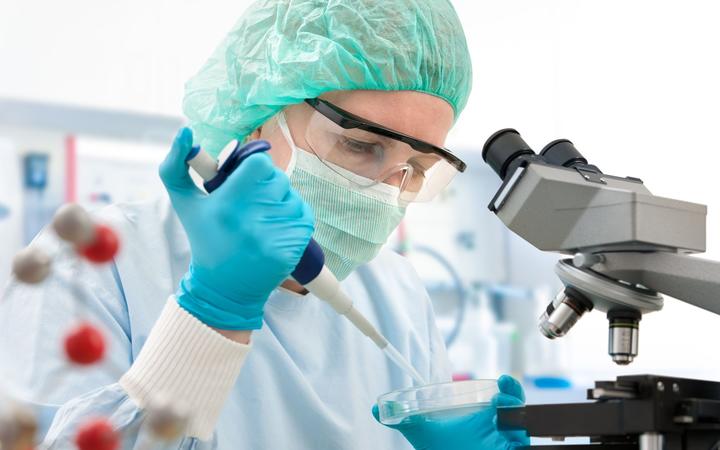 The Koru team will work with another New Zealand facility with clearances to repeat the tests against the actual live Covid-19 virus (File image). Photo: 123RF

Avondale-based Koru Lifescience is testing already registered drugs to see if any could be useful to help people infected with the virus fight it off quicker, with less damage.

Chief executive Akhil Jain said while there were other New Zealand researchers working on a potential vaccine, his company's project was the only one he knew of in the country working on treatments for Covid-19.

The team designed a tailor-made 3D computer search to examine 60,000 drugs to look for chemical structures that make good weapons to fight the new coronavirus.

From the search they found 100 drugs of interest, and these have now been narrowed down to 11, using pre-clinical laboratory tests which effectively fight the drugs off against a live virus that has a similar structure and behaviour to the one that causes Covid-19.

Like many others, the Koru team have focused on drugs targeting the characteristic spike proteins which stick out of the coronavirus, the S-protein.

These spiky structures on the virus' surface latch onto cells inside our bodies, allowing the virus to inject its own genetic data inside the cells and use our own cells to produce copies of itself, which then spread to more cells throughout the body.

If the drugs can bind with the virus spikes, they may be able to block it from binding with cells in the body, so it won't be able to replicate and spread - effectively fighting it off.

In the lab tests they've done already, the team have seen "significant binding with several sites on the S-1-protein," which was cause for excitement, Jain said.

"If we can inhibit the entry [to the cell], then there's a very good chance that we could maintain a very low viral population within a patient, and a patient would experience more like a common cold, and they would not have any serious disease progression."

They believe the drugs could all be delivered by mouth as a tablet or capsule that would begin to work against the virus within a few hours of being swallowed.

From here, the Koru team will work with another New Zealand facility with clearances to repeat the tests against the actual live Covid-19 virus; SARS-CoV-2. Afterwards, clinical trials are planned for early next year, with human test subjects who already have symptoms of Covid-19.

Jain said because New Zealand was in the fortunate situation where there were few patients here who had contracted Covid-19, the human trials might have to be done overseas.

He was also hopeful about the news coming from teams working on vaccines in New Zealand and around the world, but said it was always best to have as many potential options to fight a disease as possible.

If successful, the Koru team would register the already-recognised compounds for a new use.

"Working with known compounds is faster and easier, because they already have a known safety profile. Because when you're creating a new compound, the biggest concern is; will it be safe to consume, or will it be toxic?"

The existing drugs have already been thoroughly tested to prove their safety for humans, as well as the environment, and other animals that might be exposed to them.

"We will work with those [original] inventors wherever it's required, and collaborate with them and bring the therapy out to the market," Jain said.

"At this stage, I think the pharmaceutical industry is quite united in that way, and people are rising above and beyond just who is the owner, and we're all working in a unified format to fight against this, because this pandemic has huge economic implications."

He said as news of the global pandemic spread, the Koru Lifescience shifted their focus from other research projects to help search for a solution. They had four people working on the drug investigations, which he said was a big investment for a small company that started three years ago.

Many local and international teams and scientists shared information and advice openly as part of a massive movement worldwide to find medicines to fight the virus, and this had helped progress Koru's work significantly, and had been inspiring, Jain said.

"It's been pretty hard work for our team, we're a pretty small start-up, and it's been a lot of money spent, and a lot of firsts for the company. But our perspective was toward finding a result that can help everybody, but especially New Zealand - we've decided that if we do succeed, this will be provided at cost to the country.

"We're quite proud in a way, that we're a small country and we're trying to fight above our weight, so we're extremely proud of what we have achieved so far. We want to tell the world that we have those capabilities and expertise here as well."