Polish President Andrzej Duda has contracted Covid-19 but is feeling "good", he says. 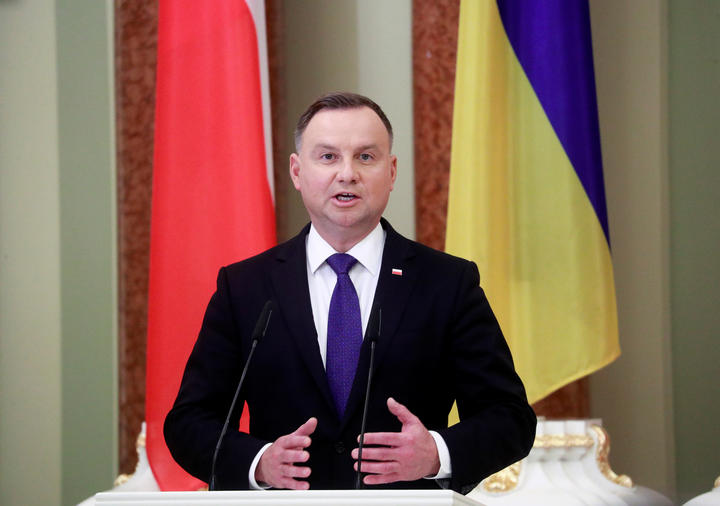 Duda, 48, was tested on Friday and found to be positive, but it is not clear when he contracted the virus.

He joins a handful of world leaders who have been ill with Covid-19, among them US President Donald Trump and UK PM Boris Johnson.

Poland faces a surge in the coronavirus pandemic, with a daily record of more than 13,600 new cases on Friday.

The country has now entered a nationwide "red zone" lockdown that includes the partial closure of primary schools and restaurants.

Duda attended an event in the Estonian capital, Tallinn, on Monday where he met Bulgarian President Rumen Radev who later went into quarantine. He also met Estonian President Kersti Kaljulaid, who has since tested negative.

"I didn't have and I don't have any symptoms, especially the serious ones like lack of taste or lack of smell, but the result of the test is absolutely clear," Duda said in a video message posted on Twitter.

"I feel good right now. I will spend the upcoming days in self-isolation along with my wife and I will be working remotely; it's not a problem at all."

Presidential minister Blazej Spychalski, who first gave details of the president's positive test, has himself tested positive and is going into quarantine.

On Friday, Duda visited a field hospital under construction at the National Stadium in the Polish capital, Warsaw. Pictures show the president wearing a face mask while meeting workers at the site.

He also met 19-year-old tennis star Iga Swiatek, winner of the French Open this year, to award her the Gold Cross of Merit for achievements in sport.

"Neither I nor members of my team have symptoms of coronavirus. We carry out tests regularly. We will quarantine ourselves in accordance with current procedures," Swiatek said in a Twitter post (tweet in Polish).

The second wave of infections is hitting Poland hard, with the number of new cases 22 times higher than the highest number of cases in the spring, although testing is now more prevalent.

The number of hospital beds in use by coronavirus patients rose by 6.5 percent on Friday to 11,496, which means 60 percent of the total available are now filled.

Under the new restrictions, gatherings of more than five are banned, and children must be accompanied by an adult when outdoors. People aged over 70 are being urged to stay at home.