France extended curfews to around two thirds of its population today and Belgium's foreign minister was taken into intensive care with Covid-19, as the second wave of the pandemic surged across Europe. 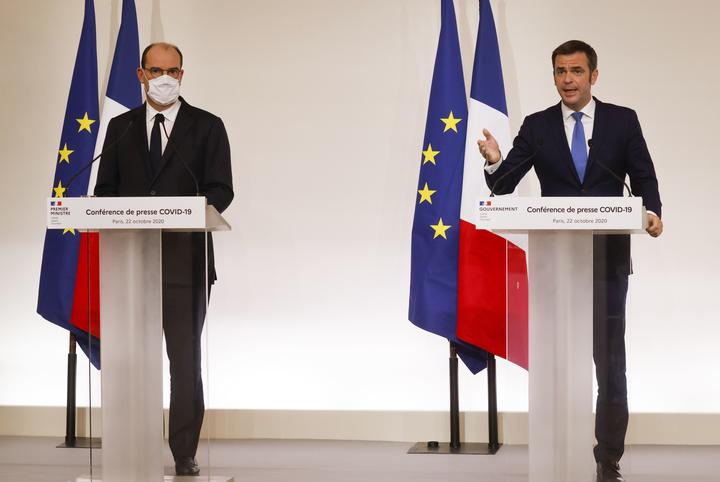 French Prime Minister Jean Castex announced a curfew imposed last week on Paris and eight other cities would be extended to 38 more departments, confining 46 million out of the country's 67m population to their homes from 9pm to 6am.

"A second wave of the coronavirus epidemic is now under way in France and Europe. The situation is very serious," Castex said at a news conference.

Shortly after the measures were announced, French health authorities reported a record 41,622 new confirmed cases, bringing the cumulative total to 999,043.

According to a Reuters tally, Thursday saw the highest total of infections reported in a single day across the world, at 422,835.

Slovakia will impose a partial lockdown to halt the spread of coronavirus infections, Prime Mister Igor Matovic said today. The lockdown will be imposed from 24 October until 2 November.

In Spain, which this week became the first European country to pass 1 million cases, Health Minister Salvador Illa said the epidemic was now "out of control" in many areas. Regional authorities debated a curfew but stopped short of taking a decision.

After Europe appeared to have gained a measure of control over the epidemic following the dramatic lockdowns of March and April, a surge in cases over recent weeks has put the continent back at the heart of the crisis.

While hospitalisations and deaths have not so far overwhelmed health systems as they did during the initial wave early this year, authorities in many countries worry the situation is rapidly reaching a tipping point.

Germany, which reported more than 10,000 daily cases for the first time, extended travel warnings for Switzerland, Ireland, Poland, most of Austria and Italian regions including Rome.

"We still have a chance to slow a further spread of the virus," Lothar Wieler, of the Robert Koch Institute, Germany's infectious diseases agency, said in Berlin.

More than 5.3m people across Europe have contracted the disease and over 204,000 have died, according to the European Centre for Disease Prevention and Control. That compares with 8.3m cases in the United States and 7.7m in India.

The resurgence over recent weeks stands in contrast to several countries in Asia, from China to South Korea or New Zealand, where draconian lockdowns and rigourous contact tracing have helped contain the disease.

Grappling with the enormous costs of the coronavirus, Europe's leaders are desperate to avoid a repeat of the blanket lockdowns that shut down their economies in the spring.

As cases have surged and health services have come under increasing pressure, they have been forced to impose and expand local restrictions aimed at reducing public gatherings to ever wider areas.

Only Sweden, a European outlier which has relied largely on voluntary measures to promote social distancing, was an exception, declaring senior citizens no longer need to isolate themselves given lower Covid infection rates than in spring.

As the crisis has intensified, much of the public goodwill seen in the first phase of lockdowns has evaporated and central governments have engaged in angry spats with local authorities from Manchester to Madrid over issues ranging from health and welfare to transport and schools.

With winter coming, health services are looking ahead with apprehension as the wave of Covid patients coincides with the usual seasonal respiratory illnesses.

"We are already swamped," said Bruno Megarbane, head of intensive care at the Lariboisiere hospital in Paris. "So, indeed, there is the fear that we will face a very difficult situation."