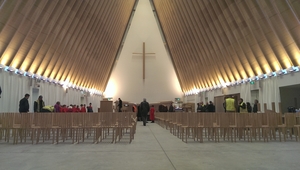 In the first event on Tuesday night, 670 people filled the plywood pews to hear the Christchurch City Choir perform.

A number of concert goers said they were impressed with the light and space in the structure.

Five of the 10 shows have already sold out, including a performance from Dame Malvina Major and an evening of Shakespeare with actors from the Court Theatre.

Acting dean Lynda Patterson said the structure is drawing attention from around the world.

"It seems outside of New Zealand this is grounds for real excitement."

Church services will also be held at the cathedral every Sunday.