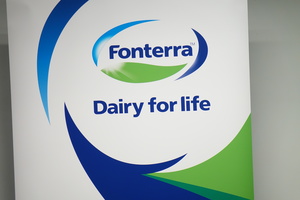 Fonterra has warned that the dairy market will be volatile in the coming months. Photo: RNZ / Andrew McRae

Its forecast has risen by 50 cents per kilogram of milks solids, taking the price to $4.75 for the current season.

When combined with the forecast dividend of between 50 to 60 cents a share, the total payout to Fonterra's approximately 10,500 farmers is estimated at $5.25 to $5.35 per kilo.

Most farmers need about $5 per kilo of milk solids cover costs.

The forecast increase follows a sharp improvement in dairy prices, which have risen by more than 20 percent in the last two GlobalDairyTrade auctions.

"Milk production is reducing in most dairying regions globally in response to low milk prices and this is bringing the world's milk supply and demand back into balance. Milk production in the EU is now in decline and our New Zealand milk collection at this early stage is around four per cent lower for the year to date."

Mr Wilson warned while prices had risen sharply, the high New Zealand dollar had offset some of those gains.

"We expect the dairy market to be volatile over the coming months and will continue to keep our forecast updated for our farmers as we move into the season," he said.

While it's still early in the season, if that price holds it means farmers would be on the cusp of breaking-even after two seasons of low prices.

Economists are urging caution for now.

"There was a similar surge of buying around this time last year which proved to be short-lived. Global milk production has fallen in recent months in response to low prices, but it remains at elevated levels," Westpac acting chief executive Michael Gordon said.

But analysts do expect milk prices to recover over the season.

Westpac recently revised its milk price forecast upwards to $5 per kilo, while BNZ lifted its estimate to $5.30 a kilo.