Forsyth Barr investment adviser Damian Kearns said the market took its lead from overseas markets, which fell last week amid growing concerns about the state of the global economic recovery. 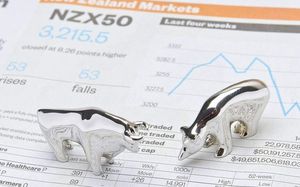 Xero was the biggest loser of the day, with the share price falling another 6 percent to its lowest level in more than a year at $17.95.

Although it last week reported a 79 percent jump in first-half sales, investors were disappointed by its growth in the United States. Customer numbers in the US reached 22,000, up 4000 between March and September.

Meanwhile, the New Zealand dollar finished the day little changed after swinging sharply from lows below 78 US cents to as high as 78.87 cents.

The head of external foreign exchange sales at ASB Bank, Tim Kelleher, said the Government's decision to change its view on the likelihood of a terrorist attack in New Zealand took the shine off the currency.