New Zealand shares gained today, with the benchmark Top 50 Index up 55 points to 5236. The dollar was stronger following the election's outcome on Saturday.

An investment adviser with Forsyth Barr, Anthony Tuck, said the electricity sector and others with regulatory exposure rose on the back of the decisive result that saw the National Party returned for a third consecutive term. 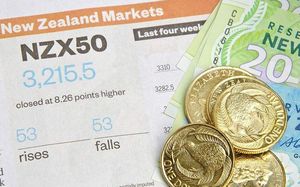 "The story of day in the markets is all about the electricity sector after Saturday's resounding National victory. All the companies in that sector are all heavily in the black, as the market fully discounts any future regulatory risk in that sector.

"Fletcher Building was also a strong performer today, partly on the back of a broker upgrade, but also because the National Government has a large number of building and infrastructure projects that it can now move forward on with much more confidence.

"Chorus - that's also a bit firmer today. Some of the investors out there are speculating than an unencumbered National Government may provide more assistance to Chorus and its ultra-fast broadband rollout.

"Sky TV's a little bit higher - there might be a view out there that's been talked about as one that may be facing regulatory risk. But generally, the market's fairly soft. The Australian market's quite weak today, so that's maybe holding us back a little bit."

The New Zealand dollar was little changed from its early morning rise to US81.6 cents tonight following the general election. That was more than a third higher than its close in New York on Friday.

"The clear factors driving the New Zealand dollar at the moment is the return towards policy normalisation of the US, which is an ongoing process we expect to continue for the rest of the year.

"As well, the demand for our commodities from China, which we're monitoring quite closely and we'll get an update from Fonterra on Wednesday, and with the Statistics New Zealand's trade balance release as to how that process is going. We expect those two to keep the New Zealand dollar under pressure."