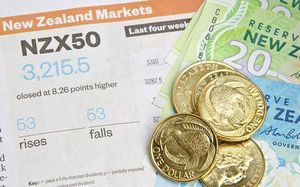 The NZ dollar fell more than half a US cent on Wednesday. Photo: PHOTO NZ

The New Zealand dollar fell more than half a United States cent today following last night's global dairy auction and the release of some key economic data from the United States.

"We actually saw contracts for delivery in February decling 5.7 percent. This has meant markets are focused on the fact that there has been little sign of a bounce in milk prices for future delivery. At present, in order to achieve current milk price payouts forecast, we would need to see that sort of bounce occurring."

"We're in the thick of earnings season right now in New Zealand and also in Australia," he said. "So reporting today was Fletcher Building, announcing a result that was perhaps slightly better than expectations, but more importantly they have now flagged a turnaround in earnings in Australia."

Mighty River Power shares are still below the $2.50 price the government sold them for in last May's float.