All aspects of the NZX's business grew in the first half of the year and the stock exchange operator has also been busy on the regulatory front.

Trading volumes rose almost 22 percent to just over 644,000 in the six months ended June, compared with the same six months a year earlier.

While the value of trades rose almost 9 per cent last month compared with June last year, the total value for the six months was down almost 16 percent, to $17.6 billion. 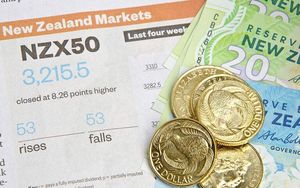 The exchange's dairy derivatives demonstrated strong growth and June was the biggest ever trading month for the market since its launch in 2010.

The exchange's Agri Information business rebounded in the six-month period, with advertising up 10.5 percent and subscriptions up 5.8 percent.

The fund management business saw a more than 6 percent increase in the number of units on issue and the value of funds under management rose nearly 14 percent.

The exchange opened 32 new investigations related to issuers in second quarter, adding to the 28 investigations it began in the first quarter. Ten were ongoing at the end of the half-year.

It also opened 21 new investigations related to market participants in the second quarter, bringing the total to 30 in the first half of the year. At the end of the period five cases were ongoing.