The trend for about 20 percent year-on-year growth in consents for new houses is continuing, and Auckland and Canterbury are unsurprisingly, leading the way. 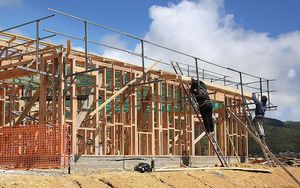 Consents for the 12 months to March were 29 percent higher than the previous year.

The trend is at its highest level since September 2007, but is still 28 percent below the series peak in January 2004.

A Westpac senior economist, Michael Gordon, said the pick-up in consents was in line with expectations.